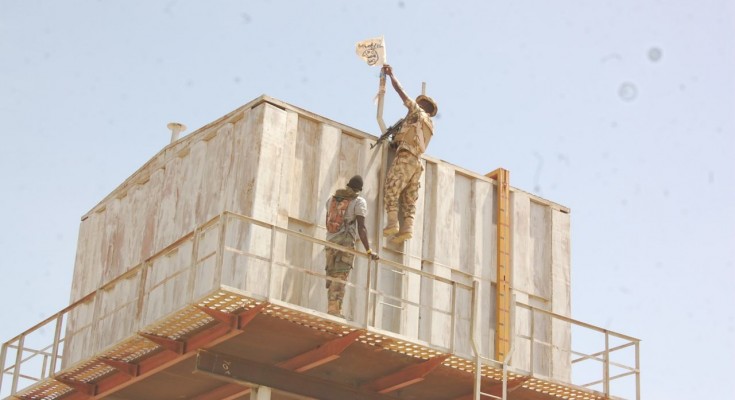 UPDATE ON CLEARANCE OPERATIONS BY TROOPS

Apr 22, 20167 Division, Operation Lafiya DoleComments Off on UPDATE ON CLEARANCE OPERATIONS BY TROOPS

In continuation of clearance operations of the remnants of Boko Haram terrorists, troops of 7 Division in Operation LAFIYA DOLE have been making tremendous progress in their various areas of operational responsibilities. They were able to carry out clearance operations, raids and patrols that resulted in the killing of so many suspected Boko Haram terrorists, arrests and rescue of persons, as well as recovery of arms and ammunitions.

On Thursday, 21st April 2016, troops of 21 Brigade Nigerian Army carried out clearance operations at Bulari, Tori 1, 2 and 3 during which they  successfully cleared the general area of remnants of Boko Haram terrorists.

During the operation, 10 terrorists were killed and one was captured alive. Unfortunately, 2 Civilian JTF accompanying the troops lost their lives. The troops rescued 7 civilians and recovered a Volkswagen Golf car, 15 bicycles and various bags of foodstuffs.

The troops of 22 Brigade on the other hand intercepted 26 persons comprising mostly women and children, coming towards Adah village in Ngala Local Government Area of Borno State, who on interrogation stated that they were held hostage by Boko Haram terrorists, but escaped as their captors were moving towards Lake Chad general area because of troops presence. Similarly, troops of the same Brigade carried out a fighting patrol, cordon and search operation on Thursday 21st April 2016, along Dikwa-Marte road, Kaje, Selenge, Manekura, Mane Gana and Gawayi villages. Although there wasn’t any encounter with the terrorists, the troops recovered 5 motorcycles, 6 Boko Haram terrorists flags and 4 bags of grinded corn in Mane Gana village. They also rescued 3 women and 5 children at the same village.  The rescued persons told the troops that their husbands were actually Boko Haram terrorists who have ran away towards Lake Chad area due to immense pressure from the military clearance operations.

On their part, troops of 3 Battalion also conducted patrol towards Diema, Sigel and Kala in which they had an encounter with Boko Haram terrorists in which the gallant troops killed 8 of them and recovered  2 Dane Guns and 4 assorted batteries. The troops of 7 Division Special Fighting Forces attached to 25 Task Force Brigade Damboa, at a checkpoint, arrested a suspected Boko Haram terrorist,  Abubakar Bello and 6 other suspects carrying 28 gallons of “Turkey” brand of vegetable oil,  8 bags of flour, 130 crates of soft drinks and 2 bags of sugar. In addition, 5 mobile telephone handsets, 1 external hard drive and 5 flash drives, 2 national identity cards and the sum of Seventy Thousand Naira (N70,000.00k) only were recovered from him. Preliminary investigation discovered that the terrorists now dilute the vegetable oil with other substances to produce diesel to power their generators.

The troops of 254 Task Force Battalion in conjunction with vigilantes and Borno Youths Empowerment Scheme (BOYES), also carried out clearance operations at  Mufurundi, Kaleri, Masemari, Bego, Bale, Gadzama and Gagantilo villages along Damboa-Bale-Gwoza road.  During the operation, the troops encountered and detonated an Improvised Explosive Device (IED), buried by the terrorists at Gadzama village. They also encountered Boko Haram terrorists at Bego where   they engaged the terrorists, neutralized them and cleared their camps within the general area. In the encounter, the troops killed 9 Boko Haram terrorists  and recovered 1 AK-47 rifle with registration number TH5712 and 17 rounds of 7.62mm (Special) ammunition. They also rescued 157 persons held hostages by the terrorists.

The troops of 26 Task Force Brigade stationed in Gwoza yesterday also intercepted 8 suspected Boko Haram terrorists, trying to enter Gwoza town. Though they claimed to be farmers coming from  Shiadawey, Takwala and Amdaga Madachi villages respectively, which were known terrorists hideouts, preliminary investigations showed that they  were indeed terrorists on a recruitment drive. This was made manifest when the sum of Six Hundred and Thirty Seven Thousand (N637,000.00k) Naira was discovered on Abdullahi  Yakubu who was identified by another escapee/suspected Boko Haram terrorist as having trading links with the terrorists while the others were confirmed to have participated in carrying out various terrorists acts for the Boko Haram terrorists group. Similarly, one Ibrahim Bute aged 67 years, of Gobara village was arrested by the troops on suspicion of being a Boko Haram kingpin.

The troops of 117 Task Force Battalion following a tip off, also arrested a suspected Boko Haram terrorist who gave his name as Bello Isah at Mugulvu village. The unit also discovered and retrieved 29  rounds of 7.62mm (Special) rounds of ammunition hidden at a farm in Gella village.

The troops in various deployments within the theatre remain vigilant with soaring morale and committed to their duties of clearing the remnants of the Boko Haram terrorists hiding in various remote corners and crannies.

Thank you for your continued support and cooperation.