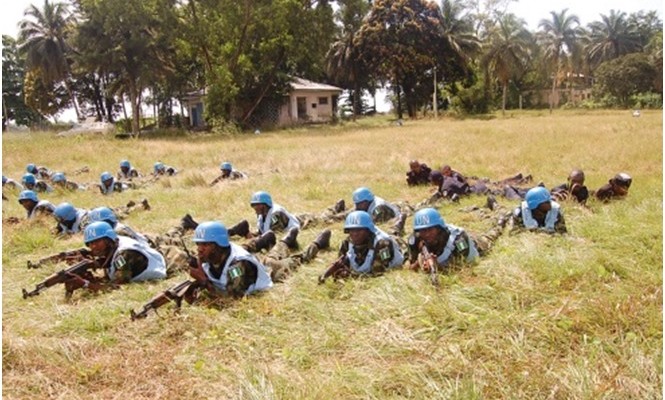 May 02, 2016PSO, SocialComments Off on NIGERIAN CONTINGENT HOLDS EXERCISE THUNDERSTORM

In an effort to improve on the combat proficiency and fulfill  the United Nations mandate ,troops of the  Nigerian Contingent (NIGCON) in  conjuction  with NEPAL  police in Liberia had conducted a  Field Training  Exercise code-named  Exercise THUNDERSTORM.

Appraising  the conduct of the exercise, the Chief Umpire who was also the Chief of  Staff forces UNMIL Brigadier General Stanley Alloh scored the troops above average in terms of the exercise order delivery and execution while enjoining them to improve.

Giving his remark at the end of the exercise, the Commanding Officer NIBATT 37 Lieutenant Colonel Sanusi  Aliyu expressed delight for the confidence the United Nation reposed on the NIGCON while assuring the umpires of the readiness of his troops to respond to any task within the United Nations mandate. The Commanding Officer pledged to improve on the inadequacies highlighted during the exercise. Aside troops of NIBATT 37 the exercise involved the NEPAL and the simulation of the Liberian National Police (LNP) who played the civil police roles .Various areas covered during the exercise includes, road block, cordon and search, crowd dispersal and other internal security operations