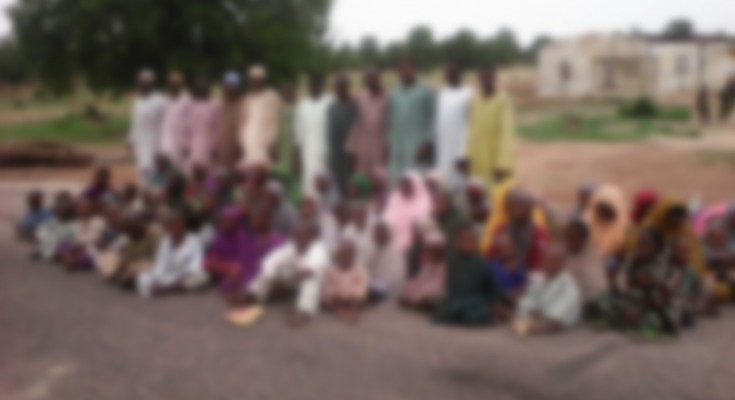 The Nigerian troops deployed in Operation LAFIYA DOLE and their neighbouring counterparts under the Multinational Joint Task Force have been very busy cleari
ng the remnants of Boko Haram terrorists in their respective areas of responsibilities. In the process, they were able to rescue quite a number of abducted persons, arrested suspected Boko Haram terrorists, recovered weapons and equipment.

The troops of 81 Battalion and 251 Task Force Battalion, 25 Task Force Brigade on 30th May 2016, received 79 persons who claimed to have been kept captives by Boko Haram terrorists at Ngwalimiri village but escaped at their location. They comprised 12 men, 24 women, 31 children and 12 infants. All of them are undergoing preliminary investigation and screening to determine their status before onward movement to Internally Displaced Persons camp for rehabilitation.

In furtherance of the efforts to keep Bitta-Damboa road open and secure to commuters, troops of 28 Task Force Brigade have cleared Bulajani, Mulgwo and Muotu villages of remnants of Boko Haram elements.

During an encounter at Moutu specifically, a soldier sustained an injury on the forehead, while 5 Boko Haram terrorists were killed by the troops, while a few others were suspected to escape with gun shot wounds. The troops recovered 3 locally made guns.

The advancing troops linked up with their counterparts of 25 Task Force Brigade at Gombori village and rescued 157 persons escaping from Boko Haram terrorists captivity. The rescued persons comprised 47 women, 91 children, 19 men. They are currently undergoing preliminary investigation and thorough screening to also determine their status. In a related development, troops of 7 Division Garrison arrested a 28 year old suspected Boko Haram terrorists’ spy, Musa Mallam Aman, around the Garrison Headquarters complex in Maiduguri metropolis. Preliminary investigation confirmed that he hailed from Maradhi village in Niger Republic and added that he was not alone as there were Boko Haram terrorists spies in Maiduguri. While efforts have been intensified to track and arrest his other accomplices, Musa has since been handed over to Joint Interrogation Committee (JIC).

Troops of 22 Brigade Garrison and their Nigerian Security and Civil Defence Corps (NSCDC) in Dikwa have also embarked on routine and fighting patrols to maintain security on construction and rehabilitation works of public buildings and infrastructure that would facilitate return of public officials and people back to their ancestral homes.

In addition, the troops have been carrying out clearance operations and patrols to keep Maiduguri-Mafa-Dikwa-Gomboru Ngala road open and secure. The troops of 26 Task Force Brigade on their part, have intensified patrols and clearance operations in their area of responsibility. It was in that process that they discovered an Unexploded Object (UXO) and its casing at Hausari Street Gada Mayo yesterday afternoon.

Troops have also arrested a deserter soldier, 03NA/53/3098 Corporal Musa Titima of 117 Task Force Battalion, attached to 114 Task Force Battalion, who absconded from duty while on Operation CRACKDOWN at Bitta. The soldier was also allegedly involved in a fracas with Mr Salisu Ngatha at Kabang Ward on 30th May 2016 that led to the death of the civilian. The soldier has been moved to the Brigade headquarters for proper investigation and other disciplinary process.

The morale of troops in the theatre of operations remains very high.
We would like to reiterate our earlier calls on the public especially in Borno State, to be security conscious and cooperate with the security agencies.