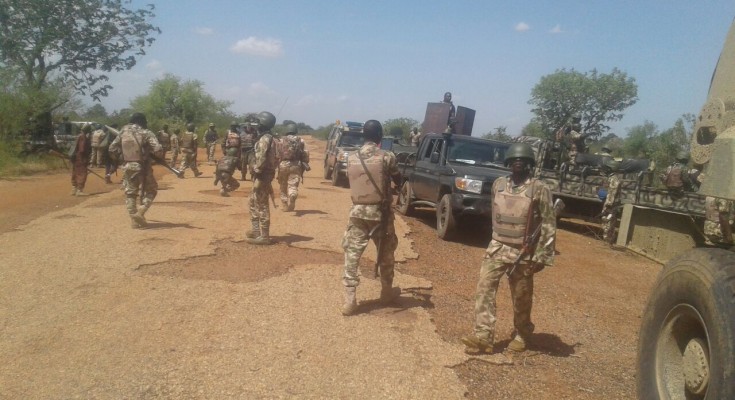 Jun 09, 20167 DivisionComments Off on TROOPS CARRY OUT JOINT CLEARANCE OPERATIONS

The villages include Kircha Goniye, Wujjah Alkelu, Kita Jiddum, Jameri, Geri Gana, Gere Kura and Jabe. Other villages cleared by the troops were Hasana Jere and Chachile. During the operation, own troops came in contact with elements of the terrorists group during which 2 of the terrorists were killed. The troops further recovered 5 Dane guns, 2 mobile telephone handsets, 3 Boko Haram terrorists flags and a Generator as well as several vehicles. In a related development, troops of 22 Brigade Garrison on blocking position also encountered a convoy of Boko Haram terrorists on motorcycles same day in which they killed 1 Boko Haram terrorist and recovered 3 motorcycles, 1 bag containing cash sum of Four Hundred and Sixty Six Thousand Naira (N466,000.00). In addition, the troops also rescued 8 abducted persons made up of 2 women, 2 female teenagers, 3 male children and a minor who unfortunately sustained injury and is receiving treatment at the unit’s medical facility. Information gathered from the rescued persons revealed that they were abducted from Ngoshe Bara village, Gwoza Local Government Area by the Boko Haram terrorists and taken to Sambisa forest in 2015 and married off to Boko Haram terrorists group fighters. They however relocated to Lake Chad general area prior to their rescue by troops.

Interestingly, one of the women, Fatima Mohammed already a mother of 2 children, lamented that her husband, Mallam Mustapha, a retired District Court Judge in Gwoza, was killed by the terrorists before her abduction. The rescued persons are further being screened to further ascertain their status.

As part of their contribution to the well being of the Internally Displaced Persons, 22 Brigade Field Ambulance has been carrying out medical outreach at tge Dikwa Internally Displaced Persons Camp in which quite a number of persons benefitted from the exercise where they were diagnosed and treated for various ailments most if which ranged from various degrees of body wounds to trauma.

Some elements of Boko Haram elements made an attempt to attack 122 Task Force Battalion location at Yamteke from Galthani and Balangaje general area which successfully repelled as quite a number of the attackers were killed.

Similarly, early Wednesday morning troops of 114 Task Force Battalion, intercepted and rescued another 15 IDPs suspected to have come from Madube. The IDPs Comprised of 7 women and 8 children. All the rescued are being screened and profiled.

On their part 7 Division Garrison in conjunction with troops of 111 Special Forces Battalion and the Civilian JTF have been performing guard and escort duties of civilian vehicles plying from Maiduguri to Damboa. This is in line with the ongoing efforts of reopening and securing Maiduguri-Damboa-Biu road for innocent citizens and commuters.

It is instructive to note that no fewer than 300 vehicles were escorted on daily basis by the units. The units and the supporting elements of the Civilian JTF also escorts Non-Governmental Organizations to various parts of Borno State to provide humanitarian assistance to the Internally Displaced Persons.

The troops also received 134 Internally Displaced Persons from Abadam which comprised of 38 male adults, 34 women and 62 children that arrived Njimtilo check point at the outskirt of Maiduguri. The IDPs were thoroughly screened by the combined team of the Military Intelligence, Department of State Services, the Police amd the Civilian JTF. They were later taken an IDP camp for proper management and rehabilitation.

The Nigerian Air Force have also continued to provide air reconnaissance and airlift of Commanders to visit troops.

In particular, the F-7 Fleet conducted armed reconnaissance over Maiduguri, Karetu and ether locations, while the Mi 17 airlifted the Acting General Officer Commanding 7 Division from Mubi to Bitta and back to Maiduguri.

The Acting General Officer Commanding 7 Division, Brigadier General Victor Ezugwu has in addition also visited troops 28 Task Force Brigade and Emir of Mubi. Similarly, he visited troops of 114 Task Force Battalion where he urged them to continue to uphold the uncommon courage and battle resilience which the Division was noted for.

He also visited tge troops of 117 Battalion as well as that of 115 Task Force Battalion and 7 Division Strike Forces in Chibok as well as 25 Task Force Brigade Headquarters. In all instances, he encouraged them to keep the Nigerian Army flag flying.