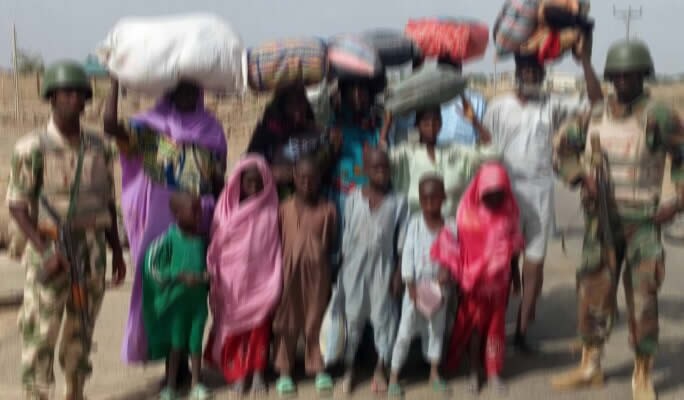 The Nigerian Army troops deployed in Operation LAFIYA DOLE clearing the remnants of Boko Haram terrorists have been busy performing their assigned tasks with varying degrees of satisfactorily accomplishments.

It is in this regards that the troops of 114 Task Force Battalion of 28 Task Force Brigade, embarked on aggressive patrol to dominate and secure the road linking Izge and Bitta.

During the operation, the patrol came across 43 persons that escaped from one of the Boko Haram terrorists hideout in Madube. The escapees comprised of 10 men, 14 women and 19 children. They are currently being screened and profiled at the Battalion Headquarters.

Similarly, troops of 115 Task Force Battalion of the same Brigade, in conjunction with some vigilante groups, also carried out patrols to Pegana, Joma, Wambiyar, Dille, Pumpum, Zah, Miya and Pugula communities and cleared them of Boko Haram terrorists.

Yesterday, some elements of the Nigerian Security and Civil Defence Corps (NSCDC), arrested and handed over a suspected Boko Haram terrorist, named Garba Thlama Mussa to the unit. He is currently being interrogated  and would be handed over to Joint Intelligent Committee.

The troops of 117 Battalion also carried out patrol within Mubi North and Mubi South to ensure general security of the areas. The same unit also provided security to Adamawa State boundaries adjustment committee during their visit to Kwaja village in Mubi Local Government Area of Adamawa State.

We are pleased to state that the troops in that axis are in high spirit determined to continue doing the nation proud.

The story is the same in 22 Brigade area of operations as troops of 3 Battalion also conducted  foot and mobile patrols towards Diema, Tatakura and Kala villages in which they had contact with Boko Haram terrorists and killed 2 of them and recovered some dangerous weapons.

Similarly, troops of 22 Brigade Garrison in conjunction with a detachment of Nigeria Custom Services personnel conducted patrol along Dikwa-Mafa-Maiduguri road to keep it safe.

As the security situation kept improving in the North East especially in the liberated and cleared areas, other security and Para-military agencies have started redeploying back to their locations. It was to this end that the Nigerian Immigration Service has also deployed its personnel in Dikwa.

The 21 personnel were received and briefed at the Headquarters 22 Brigade Garrison. The team is undergoing  training on mines and Improvised Explosive Devices (IEDs) awareness and ground signs before they commence work.

In a related development, the troops of 22 Brigade Garrison, intercepted 14  Internally Displaced Persons (IDPs) which include 3 men, 3 women, 6 male children and 2 female children coming to Dikwa from Chingowa village. The IDPs were screened by the troops and the Civilian JTF at the area and then handed over  to Dikwa IDP Coordinator for further screening, registration and rehabilitation.