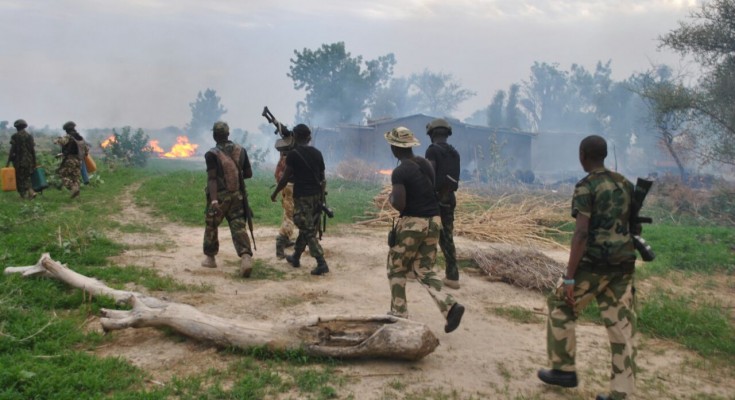 TROOPS CARRY OUT CLEARING OPERATIONS IN KIRCHA DUNGUS AND OTHER AREAS

Jun 16, 2016Operation Lafiya DoleComments Off on TROOPS CARRY OUT CLEARING OPERATIONS IN KIRCHA DUNGUS AND OTHER AREAS

In a follow up operation to ensure proper clearance of suspected Boko Haram terrorists hideouts and prevent  the fleeing terrorists  escaping from Operation CRACKDOWN,  troops of the 155 Task Force  Battalion, carried out a swift clearance  operation at Kircha Dungus village and surrounding environment, yesterday evening.

During the operation, the troops encountered pockets of the Boko Haram terrorists in which they killed 4 of them while few others fled leaving behind 4 women and a child. The troops have rescued and evacuated  them for screening and further rehabilitation.

While checking the general area, the troops further discovered a pair of military desert camouflage uniform and a Boko Haram terrorists’ flag hoisted in the village. They also recovered a Generator set and water pumping machine. During the advance to Jenere, the troops encountered some Boko Haram terrorists elements that engaged the troops in  fierce battle. The troops were able to kill 2 terrorists, wounded several others  and continued with their patrol to Jenere-Hausari.

Here, they discovered that the Boko Haram terrorists now evolved new tactics of evading surveillance by drones and aircrafts.  They now hide in makeshift camps covered with shrubs. The troops recovered some motorcycles, 2 Dane guns, large quantity of foodstuffs stored in a well constructed storage facility and solar panels.

Thereafter, the troops proceeded to Bembem, where the suspected Boko Haram terrorists also laid an ambush for them. It was however cleared successfully although a soldier sustained gun shot wound during the clearance. He has been evacuated and receiving treatment.

The team discovered and rescued some hostages held by the Boko Haram terrorists in the area. Although the patrol team did not encounter any terrorists in Maksamari, they made a very rewarding recovery of an invaluable  communication gadget.

Through it, the troops discovered the terrorists new tactics and dispositions.
In a related development, troops of the newly created 8 Task Force Division have commenced operations in earnest. The formations and units under its command have equally been involved in clearance operations through daily patrols, raids and offensive actions against remnants of Boko Haram terrorists.

It is in line with this that the troops of 153 Task Force Battalion conducted aggressive patrol to Gudusuri, Malalewa, Khadaamari, Rundi and Mugu villages in northern parts of Borno State. Although they did not encounter Boko Haram terrorists in the area,   the troops recovered 5 vehicles, 6 motorcycles and 1 Boko Haram terrorists’ flag.

In same vein, some elements of the same unit deployed at the Forward Operation Base (FOB) Old Marte, conducted another patrol to New Marte yesterday to clear suspected remnants of  Boko Haram terrorists hiding in the area.

Similarly, troops of 242 Battalion deployed at FOB Gajiganna along with 2 Civilian JTF, went on patrol to Goni Kanuburi village. Here too, no contact was made with the Boko Haram terrorists as they all fled the area.

It was the same story when the patrol team of 242 Battalion deployed at FOB Gajiram, patrolled Galle village.

The troops of  157 Task Force Battalion, 7 Brigade, have also continued to  conduct fighting patrols to continue to prevent remnants of Boko Haram terrorists freedom of action or escaping.