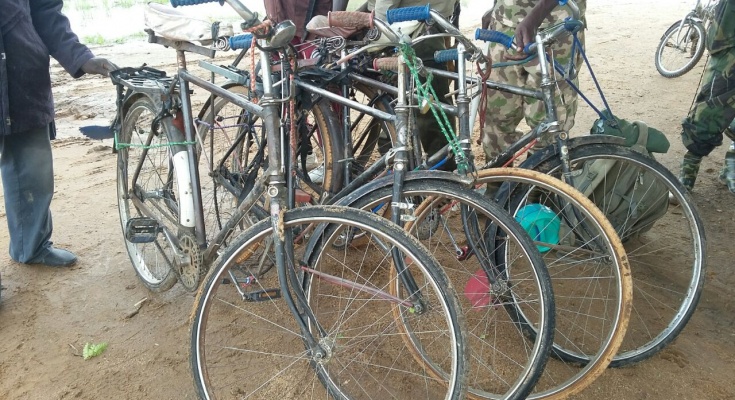 In continuation of their clearance operations against the remnants of Boko Haram terrorists in various nooks and crannies of the North East geo-political zone of the country, troops on Operation LAFIYA DOLE last night carried out a successful ambush against Boko Haram terrorists at a crossing point.
The ambush party decisively dealt with the terrorists riding on bicycles at a crossing point off Damboa-Kubwa road towards Multe village axis. The team killed 1 terrorist, while others escaped with gun shot wounds. The troops recovered 1 AK-47 rifle with registration number 565907530 and14 rounds of 7.62mm (Special) ammunition, a wooden Dane Gun shaped to the resemblance of an AK-47rifle, 1 fabricated double-barrelled pistol and 4 bicycles.
In a related development,   earlier this morning, there was a report of a suspected bag containing Improvised Explosive Devices (IEDs) near ECC premises, which is adjacent to the residence of a former governor of Borno State, Malla Kachalla, along Pompomari bye-pass in Maiduguri.