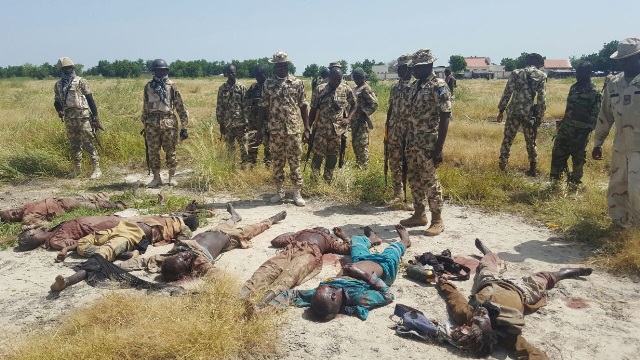 Sep 25, 2016Press ReleaseComments Off on TROOPS REPEL ATTACK AT LOGOMANI

At about 1.00am today, Sunday 25th September 2016, some suspected remnants of Boko Haram fighters attacked our troops location of at Logomani along Dikwa-Gambarou road, Borno State, in a 3 waves attack using 36 Hand Grenades and Rocket Propelled Launchers. Our troops fought gallantly and repelled the attack which lasted for about one hour. At the end of the fierce encounter, the troops counted 22 dead bodies of Boko Haram fighters. They also recovered 2 AK-47 Rifles, 1 FN Rifle, 1 G3 Rifle and some 36 Hand grenades. Unfortunately, we lost 4 soldiers and their rifles as a result of the effect of Boko Haram use of Rocket Propelled Grenades, while 2 soldiers were wounded in action. The wounded in action have been evacuated for further medical management. The location have been reinforced and replenished while the troops have continued their clearance operations.
You are please requested to disseminate this information to the public through your esteemed medium.
Thank you.