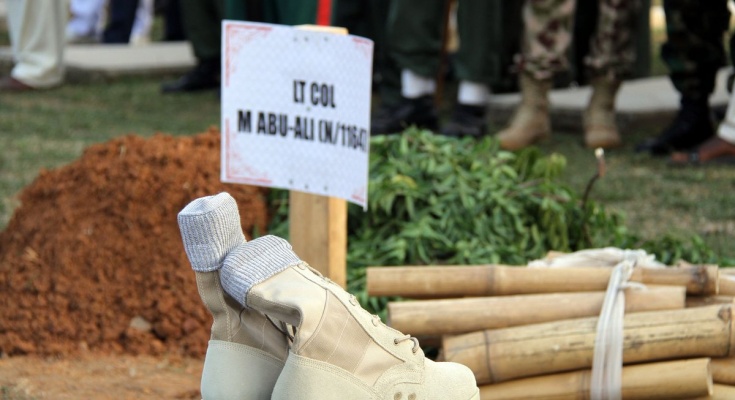 Gov Sani Bello said the fallen officer’s discipline, gallantry, bravery, patriotism, selfless service, commitment  and clear understanding of the battle space and what was at stake  ensured  various successes recorded in operations he led in the  fight against Bokom  Haram, particularly the liberation of  territory occupied by terrorists in the North East. The governor in a condolence message  signed by  his Chief Press Secretary, Malam Jibrin Baba Ndace, said Abu Ali was an example of a gentleman officer who lived by the professional demands of his calling through tactical deployment of strategic directives from the military high command in support of counter terrorism operations (Operation Lafiya Dole) in the North East.

“Late Mohammed Abu Ali’s understanding of  military regimentation, command and control structure as well as exemplary leadership ensured that his troops respected him;  and senior commanders at strategic and command levels had confidence in him.”

“He lived and died for Nigeria. The tributes,  testimony  and outpouring of emotions by his troops and others who encountered him in the course  of his professional career which earned him accelerated  promotion and Chief of Army Staff, (COAS’s) Award  for Exceptional Bravery and Excellence was  an indication that he was a war hero, who knew nothing more than service  to the nation.“

Governor Sani Bello said that Ali’s timeless quote (“Pray,stay alert and stay alive. If someone must die, let it be me”) which has gone viral with his death revealed the kind of persona and life that he lived as a military officer.

Gov Sani Bello condoled with the family of the departed hero, President Muhammadu Buhari, the Defence ministry, the military high command, the government and people of Kogi State, the Etsu Bassa Nge, and the officers and Men of 272 Tank Battalion over the lossy.

The Governor  prayed Allah to grant the late officer aljana fidausi and grant the family the fortitude to bear the irreparable loss.