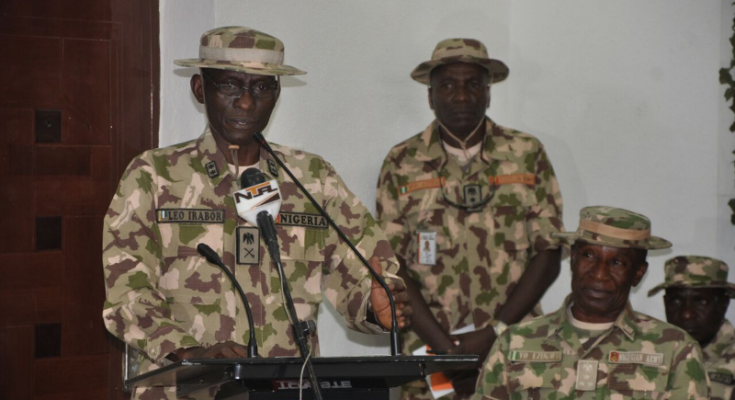 1. Ladies and Gentlemen, I wish to welcome you all to Headquarters Theatre Command for yet another live Press Conference. It is in line with our resolve to keep you and the general public informed of our activities in Operation LAFIYA DOLE. Our gallant troops have continued exploitation and mop-up operations against fleeing Boko Haram Terrorists (BHTs). The activities of the week under review show that the BHT are in disarray and are equally desperate. Therefore, this brief is intended to give update as follows: Clearance Operations. Our gallant troops have conducted some clearance operations during the last one week:

(1) On 7 Jan 17 at about 1625hrs, following reports of BHT attempting to regroup, our troops embarked on clearance operation and established contact with BHT elements at WULGE village. Fire fight ensued which resulted to 11 BHT killed in action while 9 others were captured. However, one soldier was wounded in action. The captured BHT are undergoing interrogation.

(2) On 9 Jan 17 at about 0630hrs, own troops deployed between BANKI and DAREL JAMEL conducted clearance patrol towards BHT crossing site and encountered the insurgents at about 0715hrs. The insurgents fled on sighting own troops approaching and abandoned Honda motor cycle and 6 Jerry cans of 25 litre each containing AGO. The items were destroyed in situ.
(3) On 5 Jan 17 at about 0745hrs, own troops in conjunction with CJTF conducted clearance operation along DAMASAK – GASHIGAR road. The troops successfully cleared DUOMA, ASAGA, GASHIGAR and other surrounding villages. At ASAGA village, our troops encountered and dislodged some BHT elements. Subsequently, the troops recovered corpses of one officer and 15 soldiers earlier declared Missing in Action during their dislodgment from GASHIGAR on 16 Oct 16. The corpses were recovered along Kamadugou River line. Among the recovered corpses was that of Lt Col K Yusuf, the former Commanding Officer of 223 Tank Battalion. They have since been buried in Maimalari Cantonment Cemetery with full military honours.
(4) On 8 Jan 17 at about 1125hrs, own troops in conjunction with CJTF conducted clearance operation to METELE village and encountered pockets of BHT which were successfully cleared. The troops also cleared all identified BHT hideouts from DOGON CHUKU toward TUMBUN RAGO. During the operation, 6 BHT were killed in action while 2 of our soldiers were wounded in action. The wounded soldiers are currently receiving treatment in our medical facility in Baga.
(5) On 8 Jan 17 at 0830hrs, own troops conducted clearance operation in MANAWASI and GAREL villages. The troops encountered BHT at BULAKESA village. The troops successfully cleared the BHT with support from Air Component and dominated the village. Sadly, an officer and 4 soldiers were killed in action while 3 other soldiers were wounded. A total of 50 BHT were killed in action while 3 AK47 rifles and several weapons and grenade were recovered from the BHT. Also, 9 BHT adults and 18 minors were arrested during the operation.
b. Arrests. Own troops have arrested some BHT suspects as follows:
(1) On 3 Jan 17 at about 1240hrs, 4 women and 13 children were apprehended by vigilantes at BUNI YADI and were later handed over to our troops. Preliminary investigation revealed that the women were wives of BHTs who fled from Sambisa Forest as a result of our operations. All suspects are in our custody undergoing investigation.
(2) On 9 Jan 17, a surrendered BHT identified a male sympathiser as BHT spy to MONGUNO and identified 2 wives of BHT Amir from the arrested BHT members.
(3) On 4 Jan 17 at about 1300hrs, own troops at KATARKO while on patrol along GUJBA-NANAMAJI road arrested 4 BHT suspects fleeing TALALA. Their names are Babagana Mohammedu from HONG in MICHIKA LGA, Usman Usman from FUNTUA Katsitna State, Murtala Dan-azimi from KOFAR GOMBE Bauchi State and Sanusi Dahiru from SAKWAYA in Jigawa State. Arrested suspects are in own custody undergoing further interrogation.
(4) On 5 Jan 17 at about 1030hrs, own troops and CJTF arrested 4 BHT suspects at SHUWARI village ahead of own checkpoint following a tip off that there were some BHT amirs lurking around. The suspects are Modu Auwami, Mamye Modu, Usman Kachanawa and Mallum Maji. During preliminary investigation, some local witnesses identified Modo Auwami as the one who used to provide medical treatment to injured BHT and had been seen wielding AK47 rifle on several occasions. The other 3 suspects claimed they were abducted by the BHT but only spent few days in their camps. The suspects are all from DAGUMBA and GUMSHE in MAFA and DIKWA LGA respectively. The suspects are in custody undergoing further interrogation.
(5) On 3 Jan 17 at about 1430hrs, own troops in conjunction with CJTF arrested 4 BHT suspects namely: Usman Alhaji Karama, Wakil Aga, Biye Kunti and Maimusa Khadi at SHUARI village close to custom house. The suspects were from DAGUMBA village in MAFA LGA and they all confessed to be BHT members. They claimed to have come to town to buy Tramadol tablets as they were arrested with 27 sachets of Tramadol tablets, 3 sachets of Cowbel chocolate and the sum of N5,040.00 only. They are all undergoing further interrogation.
(6) On 8 Jan 17 at about 2317hrs, following a tip-off a suspected BHT member one Abubakar Babagana Tijani (also known as Mafiyo) was arrested at GONGE area of MAIDUGURI. The suspect is believed to be among those at the top hierarchy of the BHT sect as he is especially known for his cross border activities. He has been to Chad, Cameroun and Republic of Niger at various times. The suspect has been undergoing interrogation.
(7) On 6 Jan 17 at about 1140hrs, our troops while on patrol at AWTI village general area arrested one Alhaji Muhammed with gunshot wounds on his left leg. The suspect confessed to be among the BHT that were ambushed by own troops around RANN on 30 Dec 16. The suspect is currently undergoing medical treatment in one of our medical facilities while interrogation also is ongoing.
(8) On 6 Jan 16 at about 2120hrs, own troops deployed at BUNI YADI arrested 2 men who were wandering forward of own troops location. On challenge, one of them identified himself as an ex-soldier. Troops arrested them and preliminary investigation revealed that the ex-slodier was dismissed from the military in Jan 16 at NASI while the other suspect was his friend. The suspects are undergoing interrogation.
c. Discovery of CHIBOK School Girl. On 5 Jan 17 at about 1900hrs during profiling of some rescued persons from BHT at AJIGIN-TALALA general area, our troops discovered one of the CHIBOK School girls abducted by the BHT in 2014. Her name is Rakiya Abubakar and was with her 6 months old baby boy named Abdullahi, I handed them over to the Borno State Governor same day at about 1900hrs at the Borno State Government House here in MAIDUGURI.

Handover of IDPs. On 5 Jan 17 at about 1130hrs, a total of 119 Nigerian IDPs were handed over to our troops at BANKI by the Cameroonian forces. The IDPs comprised 20 male adults, 25 female adults and 74 children. They were screened and moved to the IDP camp.

Surrendering of BHT in Limankara. On 9 Jan 17 at about 1250hrs, one Alhaji Njida, a BHT member surrendered to our troops deployed at LIMANKARA. One AK 47 rifle loaded with 9 rounds with 7.62mm special ammunition was recovered from him. He is currently in custody undergoing interrogation.
f. Person Borne Improvised Explosive Device Explosions. During the period under review, there were recorded incidences of PBIED:

BHT Attack. On 7 Jan 17 at about 1740hrs, some BHT elements attacked our troops location through the Range Area during stand-to. The troops repelled the attack. Sadly, an officer and 3 soldiers were killed in action. By first light the following day, own troops went pursuit of the attackers by trailing their tracks. The tracks led the troops through GOLGORE up to BULAISARI village, where own troops discovered a camp observed to have been their staging area. Apart from one dead BHT discovered at the camp, a camel bag and several jackets all soaked in blood were discovered. The troops also found a pair of forceps, disposable hand gloves and cotton wool all stained in blood suspected to be as a result of the heavy casualty inflicted on BHT during the attack. The camp which was deserted had a workshop, grinding mill, scattered settlements and livestock. Own troops also recovered 2 dane guns and a motorola GP 340 hand held set. Thereafter, troops cleared the camp and exploited further to AJIGIN and TALALA general area.

Recovery of BHT Items. On 5 Jan 17 at about 1000hrs, own troops conducted a mop-up operations around CAMP ZAIRO general area and recovered additional BHT items. They included a pair of black uniform with camouflage design on the edges, a précis on motar operation written in Arabic, one big size Quran, 4 notebooks containing names of BHTs, a list of BHT locs, a list of IED materials and method of preparation, breakdown of quantities of arms and ammunition issued to BHT members, some instructions written in Arabic and a small BHT flag with Arabic inscription.
i. Display of BHT Doctor and Amir.
Summary of Arrested/Surrendered BHT Suspects and Other Rescued Persons. A total of 963 civilians were arrested as BHT suspects while 2 BHT members surrendered to our troops during our operations conducted between 4 – 11 Jan 17.
2. Maritime Operation. The update for Op LAFIYA DOLE Maritime Component will be delivered by the Maritime Component Commander.
3. Air Operations. The clips of Air ops conducted during the period is as shown.
4. Going Forward. While we await other stakeholders to undertake repairs of broken down infrastructures, we have reconstructed many bridges and a bridge currently constructing one as could be seen among other construction works. I am hopeful that my earlier call to well-meaning Nigerians and corporate bodies for equipment support for construction and rebuilding of infrastructures will be fruitful.

Ladies and Gentlemen, at this stage of our fight against terrorism, I urge you and members of the general public to continue to be more security conscious. Given the apparent end of BHT, they are changing their modus operandi. As you go about your normal activities, be careful to know who is knocking at your door before opening. We shall continue to inform the public of these developments. Your continued support would be highly appreciated as we Work to Win the Peace. Winning the peace is a process. Accordingly, What value are you adding? I urge you to leave the ranks of noise and distraction. Join to add value qualitatively.