In its effort to protect oil and gas infrastructure in Niger Delta, troops of Operation Delta Safe (OPDS) have intensified its operation to frustrate the activities of economic saboteurs across the region. Accordingly, troops of Nigerian Naval Ship (NNS) Delta successfully carried out a raid on 2 illegal refineries along LAPASE CREEK in Warri South of Delta State. During the raid, 11 metal tanks, 5 dug pits with about 1750 Tons of suspected stolen crude oil and 170 Tons of illegally refined AGO were impounded.

Similarly, troops of Sector 3 also destroyed a large illegal refinery with multiple dumps at ALAKIRI in Rivers State. The bunkerers on sighting our troops set fire on parts of their bunkering camp to deny access to the illegal site. However, the troops on patrol put off the fire and destroy the illegal refinery site. We are therefore appealing the law abiding members of the public to support operational activities of Operation Delta Safe with valuable information that would lead to achieving our mandate which is “To protect Oil and Gas Infrastructure, Deter and Prevent Sea Robbery, Crude Oil theft and other Criminalities within the Joint area of Operation that could impact negatively on economic activities in Niger Delta”

You are please requested to disseminate this to the public through your medium. 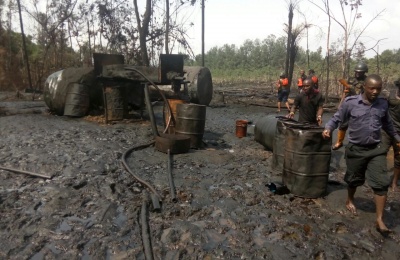