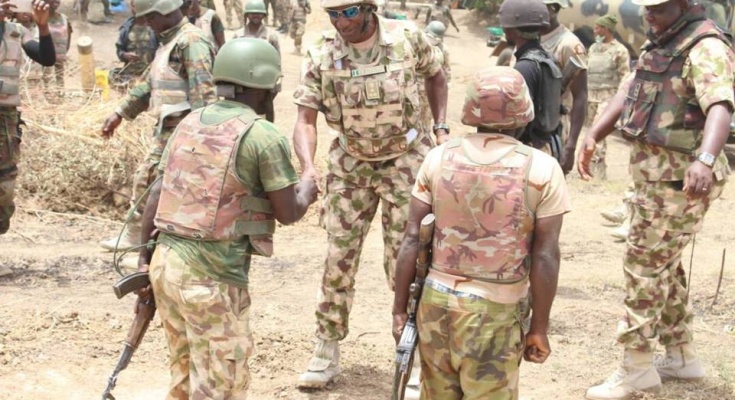 Troops of 7 Division Nigerian Army fighting insurgency under Operation LAFIYA DOLE have been charged to deal a decisive blow to rattle and dislocated remnants of Boko Haram terrorists in the North East.

The Acting General Officer Commanding, 7 Division Nigerian Army, Brigadier General Victor Ezugwu gave the charge while addressing troops deployed at Sabon Gari in Damboa Local Government Area of Borno State. He urged them to remain vigilant and alert while conducting their routine patrols and duties within the vicinity.

The GOC stated that his visit was at the instance of report of Boko Haram terrorists attack on the troops location in Sabon Gari. He commended the soldiers for their professionalism in the discharge of their duties particularly their gallantry in repelling several Boko Haram attacks on their location. He empathised with the injured and assured of adequate medical treatment for them. He enjoined the troops to pray for the souls of departed colleagues and inturn take revenge by fighting to end the insurgency in the North East.

General Ezugwu observed that Sabon Gari community was a beehive of activities as a result of the peace that has returned to the area. He also expressed delight that the populace were going about their lawful businesses. He vowed to continue the onslaught against Boko Haram terrorists until they surrender to Nigerian troops.

Similarly, the GOC visited troops at Modupe in Gwoza Local Government to motivate them. He urged them not to relent in the hunt for remnants of Boko Haram terrorists who have flee from Sambisa Forest to end the insurgency in the North in order to restore peace to Nigeria.

He was accompanied on the visit by Commander, 25 Task Force Brigade, Brigadier General Araba and some Principal Staff Officers of Headquarters 7 Division Nigerian Army.