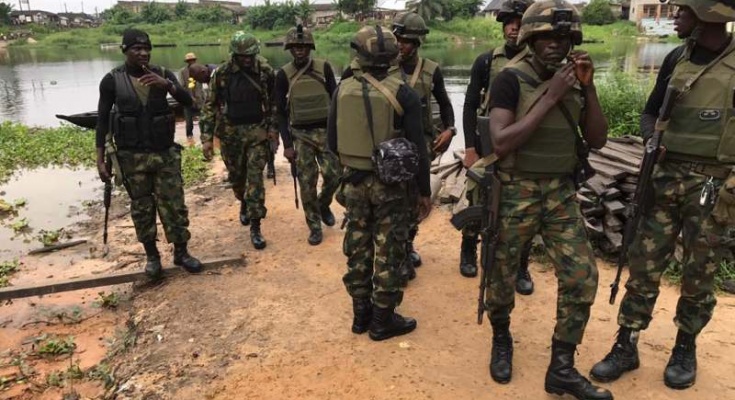 JTF INTENSIFIES CLAMP DOWN ON CRIMINALS IN NIGER DELTA

Jul 04, 2017Press ReleaseComments Off on JTF INTENSIFIES CLAMP DOWN ON CRIMINALS IN NIGER DELTA

The Commander represented by Commander Sector One, Colonel Moses Gara revealed that during the operation, 3 principal suspects were apprehended following a shootout with the suspects. They are; Mr Isiyaka Uchuko, Mr Ese James and Mr Elvis Phillips. Items recovered from them include; 13 Short barrel local made guns, 5 Double barrel local made guns, 10 x local made pistols, 3 x live cartridges, one empty catridge and 2 x Rounds of 7.62 millimeter special ammunition. Admiral Suleiman said in another development, following a tip off, troops arrested one Mr Mathew Okafor, 50 years old in connection with the buying and selling of an International oil company wellhead popularly known as “Xmas Tree” and other wellhead accessories. He added that, troops also arrested a wanted oil bunkering kingpin, Mr Nkwe Godspower, 42 years old. Items recovered during his arrest include, 10x Cheque booklets belonging to different banks, an international passport, 5 x different Identity Cards and a sum of 1,000,100. 00 only. Both suspects are under our custody undergoing preliminary investigation.

Admiral Suleiman commended the general public and the press for all the support given to troops in their effort to achieve OPDS mandate. He appealed to the members of the public to provide timely information to troops in order to get rid of criminals from the region.