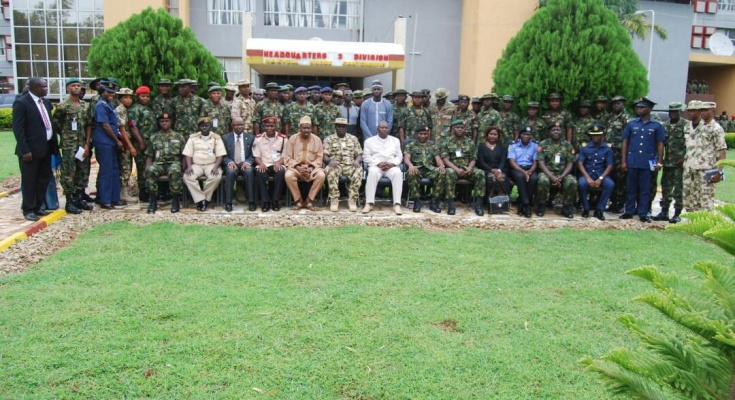 In order to have an efficient and effective civil – military relations and public supports for its operations, a one day sensitization seminar on Human Rights Abuses was held today for troops of Headquarters 3 Division and Operation Safe Haven by Army Headquarters Department of Civil – MilItary Affairs at Maxwell Khobe Cantomoment.

In his welcome address, the Director Civil -MilItary Affairs, Brig Gen SB lkumapayi stated that the objective of the sensitization workshop was in line with the Chief of Staff vision of having a professionally responsive Nigerian Army in the discharge of its constitutional roles. He urged participants to be conscious of their conducts as whatever they did in the public could go a long way in portraying the Nigerian Army positively or otherwise. He further advised the the public to take advantage of the Nigerian Army Call Centre and Human Rights Desk established in all the Divisions in addressing issues of human rights abuse by its personnel. A lecture titled, ” The Professionally Responsive Soldier: A worthy Ambassador of the Nigerian Army” was presented by Captain Kabiru Umar from Army Headquarters Department of Civil -MilItary Affairs. The special guest of Honour at the occasion was the Executive Governor of Plateau State Barrister Simon Bako Lalong who was represented by Honourable Commiissioner for Special Duties, Honourable Hitler Dadi.

You are please requested to dissemination this information to the general public.
KO OGUNSANYA
Colonel
Deputy Director
Army Public Relations