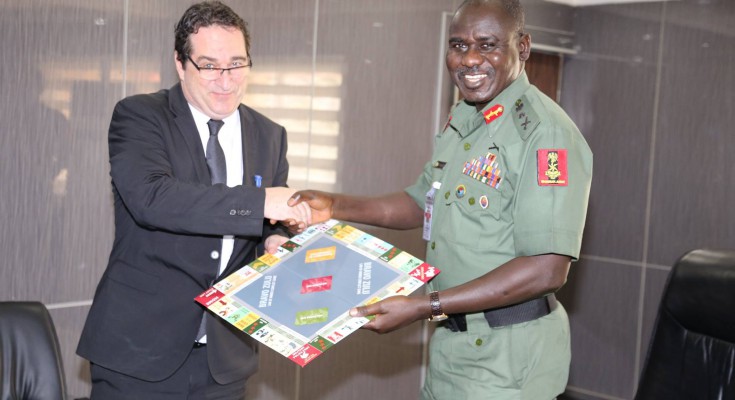 The International Committee of the Red Cross (ICRC), has commended the Nigerian Army for ensuring that detention facilities within its purview met an acceptable global standard. The Head of ICRC delegation in Nigeria, Mr Karl Mattli made the commendation yesterday when he paid a courtesy visit to the Chief of Army Staff (COAS), Lieutenant General Tukur Yusufu Buratai at the Army Headquarters.
He stated that the ICRC was quite satisfied with the conditions of the facilities and would continue to identify with the Nigerian Army, stressing that the two institutions have gone a long way in their existing cordial relationship and pledged to sustain it.

Mr Mattli further applauded the Nigerian Army’s efforts in the ongoing fight against insurgency, adding that giving the ICRC access to their detention facilities across the country was a sign of trust the Army has for the organization. He appealed to the COAS for the integration of International Humanitarian Laws into course contents for officers and soldiers.

Responding, the COAS, Lieutenant General Tukur Yusufu Buratai, thanked him for the visit and reaffirmed the Nigerian Army’s adherence to human rights in all its operations. General Buratai commended ICRC for its assistance, particularly in the provision of some amenities in the detention facilities during the visit. The COAS further stated that the mandate of the Nigerian Army is to facilitate humanitarian assistance provided by the ICRC and affirmed that International Humanitarian Laws have been integrated into course contents for officers and soldiers. General Buratai promised that the Nigerian Army would continue to collaborate with the ICRC, stressing that the report would be implemented accordingly.

Highlight of the visit was the presentation of an indoor game (BRAVO-ZULU) similar to the game of monopoly which focuses on International Humanitarian Laws for the awareness of officers and soldiers of the Nigerian Army. Present during the visit were some Principal Staff Officers of the Army Headquarters as well as officials of the ICRC.