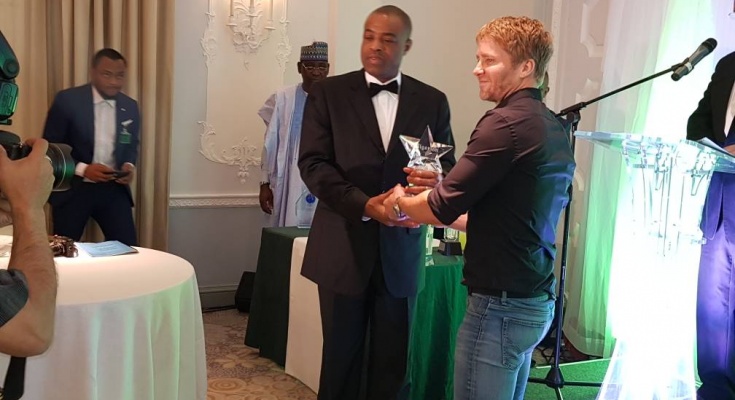 The Chief of Army Staff, Lieutenant General Tukur Yusufu Buratai and the Nigerian Army were yesterday conferred with awards of patriotism and excellence by THE NIGERIAN News Portal at The Dorchester, in the City of Westminster, London on Friday 25th August, 2017.

The Ceremony which was held to mark the one year anniversary of the London based news platform which made its debut in the blogosphere in August 2016.  According to the Chairman of the Board of Directors, of the news portal, Honourable, Dr. Sam Ode the aim of the medium was to usher in a new dimension to the international perspective of how Nigerians are viewed in and out of their country and to have an objective, balanced and accurate information about Nigeria and performances of its citizens devoid of sentiments in an era of fake news.

He specifically commended the awardees as the very best of the best that country parades at the moment and further saluted the readers and fans of THE NIGERIAN who took out their time to screen and vote all the nominees who were selected from a long list of patriotic, service-driven and dedicated Nigerians in their respective fields of endeavours.

The award of “THE NIGERIAN OF THE YEAR” according to the News Portal was in recognition of the selflessness of the recipient and to appreciate Lieutenant General Tukur Yusufu Buratai’s enormous sacrifices and patriotism in leading the campaign against insurgency in Nigeria and the efforts of the Nigerian Army under his leadership to humble the insurgents within a record period of time. “This is our own way of endorsing the global appraisal of the decisive leadership of the Nigerian Army under Lieutenant General Buratai.”

The Nigerian Army as the “Best Public Institution in Nigeria of the Year Award”, to THE NIGERIAN, was the collective decision of its fans and readers to commend all the officers and men of the Nigerian Army for their relentless sacrifices in combating terrorism, extremism and separatism within the rules of engagement and best human rights convention in its pursuit of defending the territorial integrity, sovereignty of the state and the numerous corporate social responsibilities like provision of pipe borne water, educational support, medical assistance to various communities and the internally displaced persons in Nigeria, as well as sanitation exercise and construction of roads.

The awards which were presented by John Milton, renowned American Journalist with specialty in photojournalism and Patrick Smith, Editor in Chief, African Confidential Magazine were received by Major General Chris Jemitola, Chief of Policy and Plans (Army), on behalf of the Chief of Army Staff, Lieutenant General Tukur Yusufu Buratai and the Nigerian Army.

In his acceptance remarks, the representative of the Chief of Army Staff, Major General Chris Jemitola thanked the medium for the nomination and all those that voted for both the Nigerian Army and the Chief of Army Staff for the prestigious awards. He further stated that Nigerian Army would continue to do its best to ensure that it discharge its duties responsibly and professionally. He further added the Nigerian Army was deeply humbled by the awards, “We are indeed very grateful and proud of this recognition and awards”.

The occasion featured paper presentation on titled “Oil, Terrorism and Globalization: Security Challenges to the Capitalization of Nigeria’s Natural Resource Market” by Elizabeth Robertson and David Fault of Preventive Diplomacy.

Those at the award ceremony include the Minister of State for Petroleum, Dr. Ibe Kachikwu, representative of the Executive Governor of Plateau State Dr. Gabriel Longpet, the Chairman, Plateau State Association Charity Committee in the United Kingdom, Dr. Isa Pantami, Director General NITDA and Major General Chris Jemitola, as well as senior military officers Nigerians from various walks of life based in London, intellectuals and media executives.

It will be recalled that the Chief of Army Staff was on Thursday 24th August 2017 awarded the Nigerian Institute of Management’s “Presidential Award for Excellence” in Lagos.