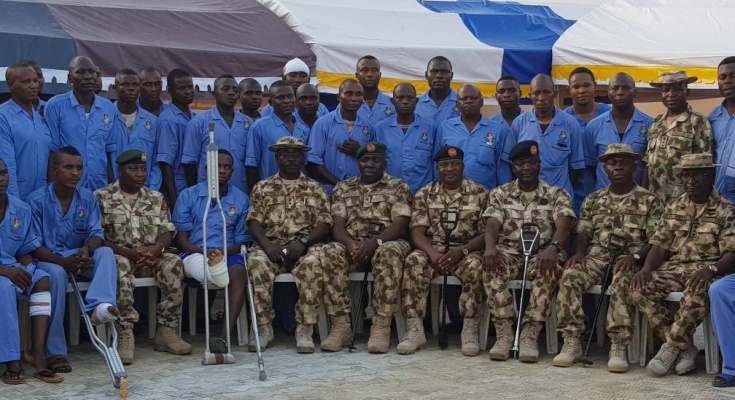 ⁠⁠As part of the routine visits to troops at Operation LAFIYA DOLE, the Chief of Staff, Lieutenant General TY Buratai, delegated Major General David Duwandi Ahmadu, the Chief of Training and Operations (CTOP) to visit and celebrate Sallah with troops.He was at 112 Task Force Battalion, Mafa, Borno State on Saturday 2nd September 2017, where he celebrated Eid with the troops and then had dinner party with troops at Maimalari military cantonment, Maiduguri.

At 112 Task Force Battalion, Mafa, the CTOP was received by the Commander 22 Briagde, Briagdier General Suleiman Idris and after inspection of the Quarter Guard, he was introduced to the officers of the unit and Mafa Divisional Police Officer, Mr NS Gaya. Major General Ahmadu was briefed by the Commanding Officer 112 Task Force Battalion, Lieutenant Colonel SBN Egbulem on the unit’s activities in its area of responsibility. He thereafter moved to troops’ defensive locations where he conveyed the Chief of Army Staff’s Sallah goodwill message to them and then had lunch with the troops. The chairman of Mafa LGA Caretaker Committee, the District Head and other members of community, as well as vigilantes also attended the event. Similar celebrations with troops took part in all Nigerian Army formations and units in which Commanders interacted with the troops and some members of the host communities. Meanwhile, the CTOP has continued to other units.