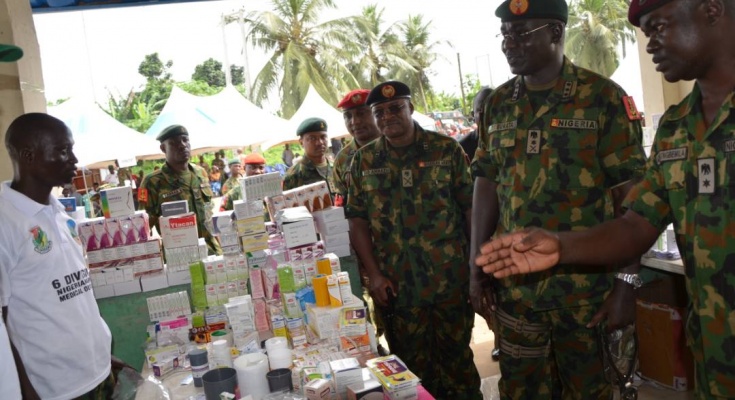 In line with the Nigerian Army Training Directives 2017, Exercise CROCODILE SMILE II was conducted simultaneously across the Areas of Responsibility (AOR) of 2, 6, 81 and 82 Divisions of the Nigerian Army covering parts of South-West, South-East and South-South geo-political zones of the country from 7th – 28th October 2017. The Exercise was officially flagged off at Takwa Bay, Iti-Osa Local Government Area, (LGA) Lagos State in 81 Division AOR on 6th October 2017 by the Chief of Army Staff (COAS), Lieutenant General Tukur Yusufu Buratai while the official closing ceremony was conducted by the Special Guest of Honour, the Honourable Minister of Defence, Mansur Muhammad Dan-Ali at the 6 Division Step Up Headquarters in Igwuruta, Ikwerre LGA of Rivers State on 30th October 2017. Present at the closing ceremony were the COAS, the representatives of the Executive Governors of Bayelsa and Rivers States, Chairman Rivers State Council of Traditional Rulers, Principal Staff Officers from the Army Headquarters among other dignitaries.

The Exercise has been adjudged as one of the most successful military exercises conducted by the Nigerian Army in recent times. It has been observed that the exercise has greatly achieved its main objectives in the areas of training, operations, Inter-Agency as well as Civil-Military Cooperation.

In 6 Division AOR in particular, the following unprecedented successes were recorded:

Anti-Illegal Oil Bunkering
During the exercise, a total of 46 illegal oil bunkering camps were discovered across Bayelsa, Rivers and Akwa Ibom States. The vigilant troops were able to locate and destroy all the illegal refining camps as well as Cotonou boats and wooden barges loaded with stolen crude and other illegally refined products. The troops also destroyed illegal oil dump sites, arrested vehicles involved in transportation of illegal products as well as persons found to be complacent in the perpetration of such illegal activities.

A total of 13 cases were recorded across the AOR of the Division in which suspects were arrested and in most cases firearms and other dangerous weapons were recovered.

The reinvigorated Anti-Kidnapping Squad of the Division which works round the clock succeeded in busting 9 kidnap syndicates during the period under review with significant arrests that led to useful information about criminal hide-outs, modus operandi and sources of weapons for their heinous acts. These successes could be attributed to the cooperation of law-abiding citizens who utilized the Division’s dedicated phone lines (09072509436, 09072509437 and 09072509438) to report incidences and volunteer tip-offs.

Civil-Military Cooperation Activities
Despite the initial futile attempt by some callous and mindless propagandists and other enemies of state to mislead the teaming would-be beneficiaries of the free medial outreaches, free educational outreaches and other community relations activities planned to take place during Exercise CROCODILE SMILE II, 6 Division Nigerian Army countered their narrative by going ahead to launch the free medical outreach at Igbo-Etche and Elele communities of Rivers State, Obama and Ozagbene communities in Bayelsa State with a record 10, 000 beneficiaries across the Division’s AOR while 16 Brigade, one of the Division’s subordinate formations made a huge donation of medical and healthcare materials to the Federal Medical Center Yenagoa, Bayelsa state. A total of 1000 students of Igbo Etche Community Secondary School (Junior and Senior) benefited from the educational outreach with mathematical sets and branded note books. The General Officer Commanding 6 Division Nigerian Army Major General Enobong Okon Udoh also pledged to renovate some of the class rooms at Community Secondary School Igbo Etche as part of his Division’s contribution towards the development of education in the community amid cheers by both the staff and students of the school. In a related development, some of the troops of 6 Division were equally at hand to offer community services by conducting sanitation exercises at Elele, Igbo-Etche and Mile 3 in Rivers State, Opolo round about and Elebele Road in Yenagoa. Most historic among these activities was the face lift given to the location of the first ever oil well in Nigeria designated Oloibiri Oil Well 1 at Oloibiri Bayelsa State by 16 Brigade. It is worthy to note that troops of 16 Brigade also assisted the return of 176 Internally Displaced Persons (IDPs) among them women and children who had been displaced from their homes at Premabiri in Bayelsa State since 2015 due to crisis that engulfed the area.

Arrest of Suspects
A total of 49 suspects were arrested in 19 separate incidences on various offences ranging from cultism related activities, illegal oil bunkering, illegal possession of arms, narcotic activities, financing criminalities and kidnapping among others. All arrested suspects and exhibits were handed over to relevant security agencies for possible prosecution.

You are kindly requested to disseminate this information to the general public. Thank you for your usual cooperation.