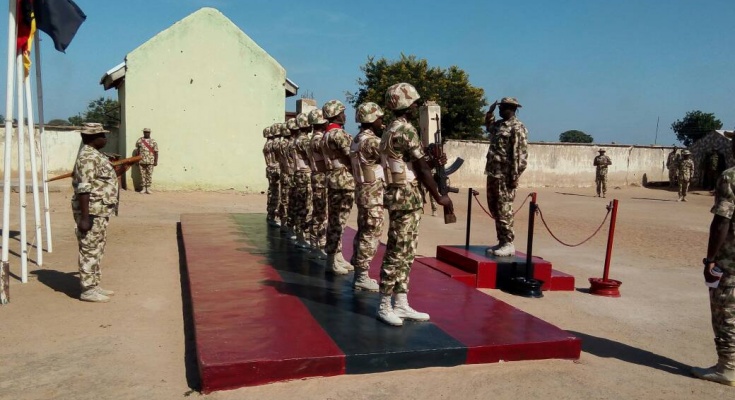 Nov 10, 20176 DivisionComments Off on CHANGE OF COMMAND AT 27 TASK FORCE BRIGADE

The out gone Brigade Commander, Brigadier General Aminu Bande bit farewell address to the troops of the brigade, on Wednesday 8 November, 2017 at the brigade parade ground, Buni Yadi, Yobe State.

In his address to the troops he urged them not to relent their effort in fighting against Boko Haram Insurgents, he added that combat team of troops have been deployed from Goniri, Malumti, Mungusum, Ajigin, Talala and Buk in an advance to comb Boko Haram out of their strong hold areas, the operations which comprises of 27 Task Force Bridge, 29 Task Force Bridge, 25 Task Force Bridge and a team from Armed Forces Special Forces respectively, while he charged troops to always be at alert at their defensive post, General Bande who was posted to 6 Division Nigerian Army as the Garrison commander.
In his response, the new Brigade Commander, Brigadier General Kabiru Nadama Garba, commended the effort of the outgoing Bridgade Commander for his commitment to security of Yobe State and it’s environs for the past eight months, while he promise to build on the past achievement already recorded by the brigade.
The highlight of the ceremony were signing of the official handing and taking over note, address to the troops, Decoration of outgoing commander with operation LAFIYA DOLE MEDAL, inspection of quarter guard and presentation of 27 Task Force Brigade Flag to the new commander.
Present at the ceremony were the commandant, Nigerian Army Special Forces School, Buni Yadi, Brigadier General Moundhey Ali, the Director of the School, Colonel Marcel Ejike and other principal staff officers from and Nigerian Army Special Forces School.