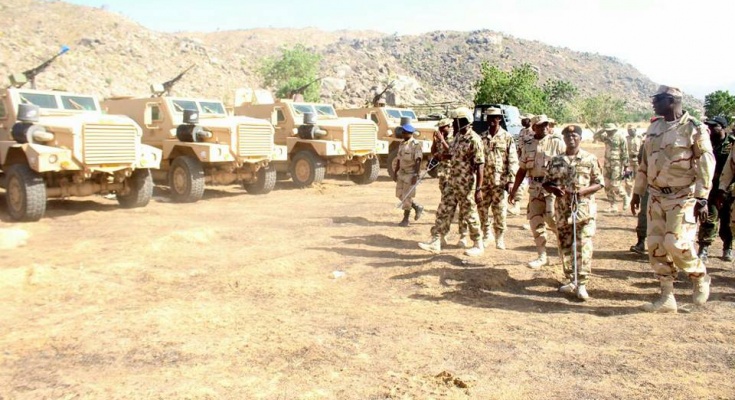 The Theatre commander operation LAFIYA DOLE Major General Rogers Nicholas on Sunday 4th February 2018, led a joint team of Field Commanders from Operation LAFIYA DOLE and Cameroonian Defence Forces to formally receive and induct Cameroonian troops who arrived Gwoza to join in the ongoing counter terrorism and counter insurgency operations in the north eastern Nigeria and the borders between Nigeria and Cameroon. Welcoming the troops into the theatre of operation, the Theatre Commander charged them to exhibit discipline and professionalism in the discharge of their assigned tasks and duties. He urged them to be courageous and display aggression towards the insurgents during operations. Major General Nicholas also admonished the troops to be obedient to instructions from their commander’s, adding that their compliance with these instructions will facilitate the decisive defeat of the insurgents sooner than expected.
The Theatre Commander was accompanied by the leader of the Cameroonian Defence Forces delegation Brigadier General Djonkeb Frederick, the General Officer Commanding 7 Division Major General Ibrahim Yusuf, the Chief of Staff Headquarters, Theatre Command, Brigadier General IL Akinlawon and other senior military officers from both countries. The Theatre Commander along with the senior officers also inspected the equipment of the newly inducted Cameroonian troops. The troops and their equipment were subsequently handed over to the General Officer Commanding 7 Division who is also the Commander Sector 1 of Operation LAFIYA DOLE.