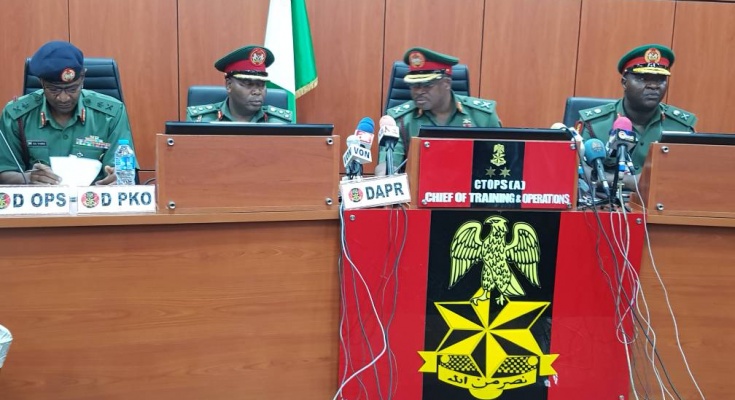 Gentlemen of the press, on behalf of the Chief of Army Staff, I most sincerely welcome all of you to Army Headquarters Conference Room, venue of today’s briefing on the planned conduct of Exercise AYEM AKPATUMA to be conducted in 1 and 3Divisions including HQ CAR, Gds Bde and 707 SF Bde Areas of Responsibility, covering (Benue, Taraba, Kogi, Nasarawa, Kaduna and Niger states) from Thursday 15 February to Saturday 31 March 2018.
You may recall that last year, the Nigerian Army conducted several training activities for its personnel in different geopolitical zones of the country, in line with its constitutional role in aid of civil authority. More so, Exercise AYEM AKPATUMA has become more expedient due to upsurge in cases of armed banditry, kidnapping and cattle rustling in Kaduna and Niger States as well as other sundry crimes in Kogi State and herdsmen/farmers clashes and attacks on innocent members of our communities particularly in Benue, Taraba and Nasarawa States by armed militias. These security challenges have continued unabatedly in these States despite the efforts by sister security agencies to curb them.

The need for troops to be exercised, refreshed and to imbibe the requisite skills to cope with these emerging security challenges within the 1 and 3Divisions including HQ CAR, Gds Bde and 707 SF Bde Areas of Responsibility in aid of civil authority calls for this exercise. Also, the drive towards actualizing the COAS vision, which is “To have a Professionally Responsive NA in the Discharge of its Constitutional Roles”, informs the plan for the conduct of this exercise. This exercise will be conducted in conjunction with other security agencies such as Department of State Services, the Nigeria Police and Nigeria Security and Civil Defence Corps. It will also afford the troops an opportunity to effectively checkmate the dreadful activities of the marauding criminal militias perpetrating criminal acts in these States and its environs.

Additionally, Exercise AYEM AKPATUMA is also conceptualized to dovetail into real time operations thereby fulfilling both training and operations objectives of sharpening operational skills of personnel as well as providing an avenue to conduct operations against violent criminals when called upon. Exercise AYEM AKPATUMA will also be unique as the ones before it with the establishment of Step-Up Brigade Headquarters in Benue, Taraba, Kogi, Nasarawa, Kaduna and Niger States. Emphasis will be placed on raids, cordon and search operations, anti-kidnapping drills, road blocks, check points and show of force, as well as humanitarian activities such as medical outreach.

It is pertinent to note that Exercise AYEM AKPATUMA is set to be another remarkable exercise that would make the nation proud of the Nigerian Army’s determination at sustaining its constitutional role of defending the territorial integrity of the nation as well as its commitment to aid the civil authority to bring about peace and security in troubled areas. In this regard, members of the public especially the residents of Benue, Taraba, Kogi, Nasarawa, Kaduna and Niger States are enjoined not to panic as the security, safety and well-being of innocent and law abiding citizens have been deliberately factored in the planning of this exercise . Furthermore, the troops taking part in the exercise would be guided by the Professional Code of Conduct, Rules of Engagement and the respect for human rights. Thus, the general public is requested to remain vigilant and be security conscious, as suspected criminals may be fleeing from military operations in these areas and finding safe haven amidst our communities. The public is also reminded to report any suspicious activity or movement to the nearest military formation or other security agencies for prompt action. In order to ensure cordial civil-military relations, we shall make contact phone numbers of all Brigade Commanders public in addition to the Nigerian Army short code Information and Call Centre 193.

Gentlemen of the press, you have always been our partners in progress; hence we are using this opportunity to request you to give this exercise widest publicity in your respective media. On this note, on behalf of the Chief of Army Staff, officers and soldiers of the Nigerian Army, I thank you all for honouring our invitation. I will now take questions from you and clarify doubts if any. 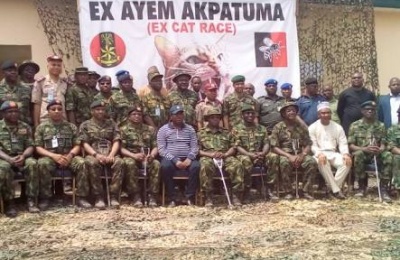 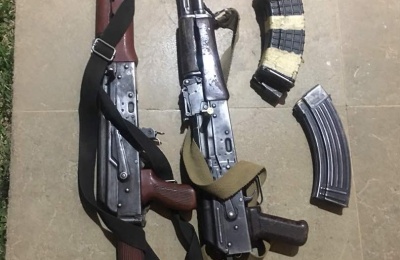 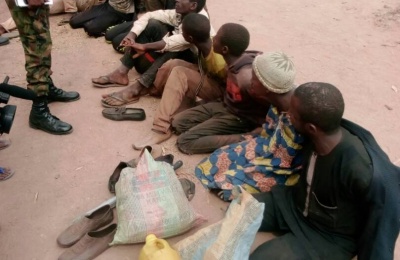