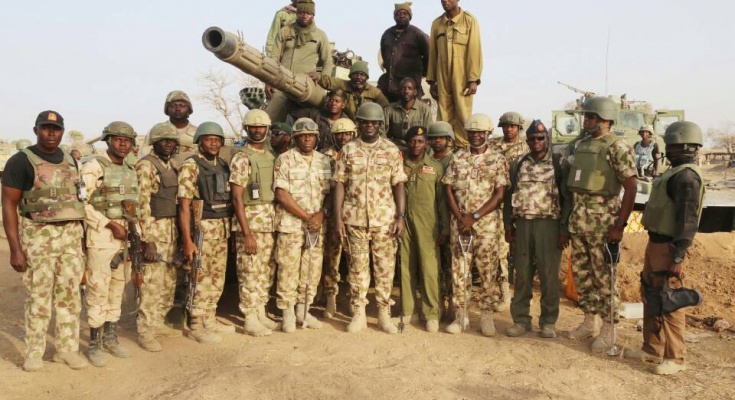 COAS VISITS TROOPS AT THE FRONTLINE

In his bid to further boast troops morale and see things for himself, the Chief of Army Staff (COAS), Nigerian Army, Lieutenant General TY Buratai along with some Principal Staff Officers of the Army Headquarters and Commanders, undertook operational visit to troops locations in the north east with specific emphasis on Sambisa forest on Saturday 17th February 2018. His first port of call was Bitta, where he was received by the General Officer Commanding 7 Division and Commander, Sector 1 Operation LAFIYA DOLE, Major General IM Yusuf and the Commander 26 Task Force Brigade, Brigadier General IM Obot.

Thereafter, he inspected a Quarter Guard mounted in his honour by the Brigade and was briefed by the Brigade Commander on the performance of his command especially as regards Operation DEEP PUNCH II and clearance of Boko Haram terrorists out of their various operational stronghold in Sambisa forest. In his remarks, the COAS commended the Commander and urged him to keep the momentum.In all the places visited, he expressed happiness with the troops commended them for their resilience and excellent performances.

The Chief of Army Staff also addressed and interacted with the troops along with the elements of Cameroonian Defence Forces in the area. In his address to the troops at Bitta, he congratulated them for the clearance of Boko Haram terrorists. He noted that Sambisa forest has been an impediment in the fight against terrorism and insurgency over time and their clearance of the forest is considered a major milestone in the operation. He further added that the President and Commander-in-Chief is very pleased with their performance. He also said that with the approval of the sum of $1 Billion by the National Economic Council to the military, very soon the Nigerian Army would have more Mine Resistance and Ambush Protected (MRAPs) vehicles Armoured Personnel Carriers (APC) and other equipment injected into the theatre. While addressing the elements of the Cameroonian Defence Forces, Lieutenant General Buratai thanked them for their efforts and support and urged them to continue to operate along with their Nigerian counterparts to attain the desired result which is total clearance of Boko Haram terrorists wherever they might be hibernating.

At Tokumbere, he addressed troops in which he also extended the President’s Goodwill message congratulations for their bravery and dedication to duty which brought about the fall of Boko Haram operational enclaves in Sambisa. He also urged them to maintain the pressure on the fleeing terrorists wherever they run to, adding that Sambisa forest has come to stay as Nigerian Army training area and urged them not to relent in their efforts. He also said that “You must maintain this momentum and justify the confidence reposed in you by Nigerians”. The Chief of Army Staff further stated that the Nigerian Army is expecting a number of equipment which the Federal Government is procuring for the military.

At Sabil Huda, he was conducted round the Battle Groups 1 and 2 deployments locations, the new borehole and shown some of captured Boko Haram terrorists Armoured Fighting vehicles and equipment. He thereafter addressed the troops. In the address, he congratulated them for routing out Boko Haram terrorists out of their enclaves and encouraged them to work harder to clear the remnants of the Boko Haram terrorists that might be hiding in the area. He also said that Mr. President and Commander-in-Chief is very proud of their exploits.

While the Chief of Army Staff and his team were at Sambisa Forest, the Chief of Training and Operations (Army), Major General DD Ahmadu, Director Military Intelligence, Major General AA Tarfa and Provost Marshal (Army), Major General AT Hamman led other teams where they visited troops locations under 5 Brigade, 21 and 22 Brigades Nigerian Army at Gubio, Bama and Dikwa, respectively. Their visits followed the same pattern with that of the Chief of Army Staff; they received briefing, went round troops deployments, addressed and interacted with the troops. They were equally accompanied by other senior officers from the Army Headquarters and the Theatre Command.

3 thoughts on “COAS VISITS TROOPS AT THE FRONTLINE”