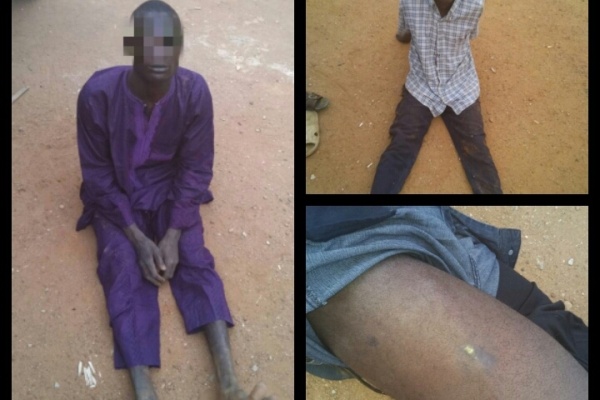 Troops of 23 Brigade Nigerian Army under Operation LAFIYA DOLE on 28th March 2018, acting on a tip off arrested 3 suspected Boko Haram terrorists at Ngurore. The suspects, Adam Yagga, Musa Kamsulum and Abba Djidoum are all from Darajimal in Bama Local Government Area of Borno State.

One of the suspects, Abba Djidoum, with series of Gunshot wounds on his thigh, confessed to have operated with the Boko Haram terrorists at fringes of Izza, Wudula and Blakule in Bama Local Government Area of Borno State. Suspect is undergoing preliminary investigation with 23 Brigade Provost Company.

We commend patriotic members of Civilian vigilante (Civilian JTF) for their resilience, continued cooperation with troops and urge members of the public to emulate their vigilance and security consciousness by reporting any suspicious persons or objects to the nearest military location.


We wish to remind repentant Boko Haram fighters that the window of opportunity to embrace the Federal Government Amnesty program is still open for them to surrender and lay down their weapons. It is also gratifying to report that the troops’ morale remains high as they dominate the general area with a robust fighting patrol in continuation with the clearance operations.

Please kindly disseminate this information through your reputable medium to the general public.