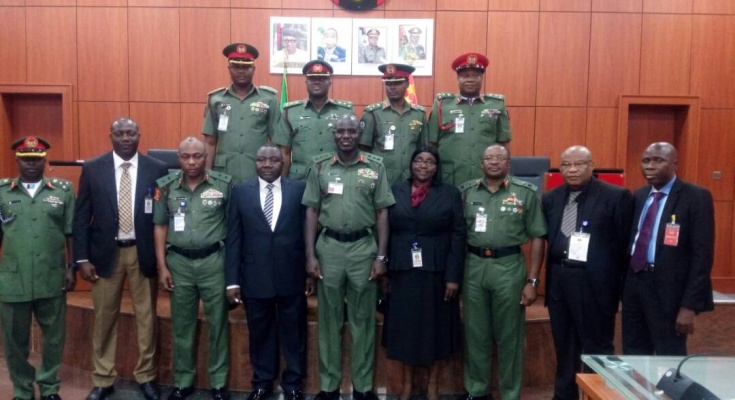 Apr 09, 2018Press ReleaseComments Off on ADDRESS BY LT GEN TY BURATAI DURING THE INAUGURATION OF THE PANEL TO INVESTIGATE ALLEGATIONS MADE AGAINST THE NIGERIAN ARMY IN THE COURSE OF OPERATIONS IN TARABA STATE

1. The NA has over the years conducted operations in line with its constitutional responsibility of defending the territorial integrity of Nigeria and providing aid to civil authority whenever it is called upon for such a task. However, the actions of the NA in recent military operations particularly in Taraba State, have been criticized by individuals and interest groups from different sectors of the society. Some of these concerns have come from the State Government, Non-Governmental Organizations (NGOs) and very senior citizens from the state. Most recently, on the 24 Mar 18, a former COAS Lt Gen TY Danjuma (rtd) speaking during the convocation ceremony of the Taraba State University, alleged that the Armed Forces of Nigeria (AFN) collude with armed bandits and other criminal elements. Statements of this nature could damage the reputation of the AFN and thus cannot be ignored if the NA is to continue to earn the trust and respect of the Nigerian populace. Thus it became imperative for the NA to set up this Panel to confirm the veracity or otherwise of these allegations.

2. As members you were carefully selected based on your proven record of integrity and meticulousness. I have no doubt that you will do a great job. The Terms of Reference given to you is robust and has been articulated to enable you focus on the crux of the matter and expedite your actions towards unravelling the true situation of things. I have directed AHQ DAPP and the various formations to provide you with all the necessary logistics required for the completion of your assigned tasks. You are enjoined to visit all flash points and interact with various stakeholders and interest groups in Taraba State in order to come up with a comprehensive report. Let me hasten to add that the task at hand is a burning national issue, hence you are to treat this assignment with the seriousness it deserves.

3. To this end, by the powers conferred on me as the Chief of Army Staff, I hereby officially inaugurate the constituted panel to investigate the allegations made against the NA in the course of operations in Taraba State. Thank you and God bless.