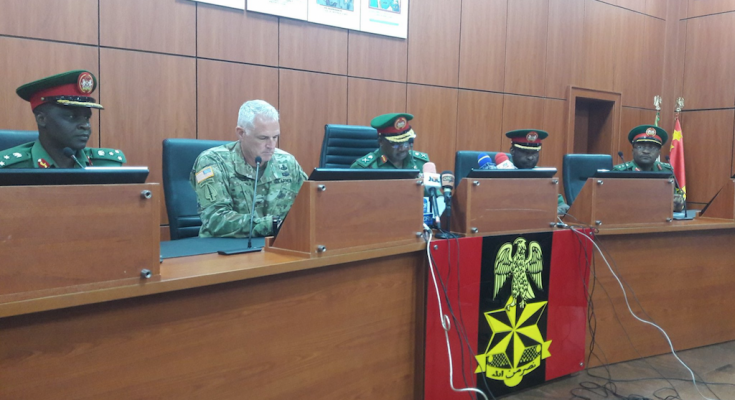 1. Gentlemen of the press, on behalf of the Chief of Army Staff, Lieutenant General Tukur Yusufu Buratai, you are welcome to Army Headquarters Conference Hall for the press briefing that will kick start the African Land Forces Summit holding from Monday 16 to Thursday 19 April 2018.
2. As you are all aware, the Nigerian Army is constantly carrying out training activities and updating its personnel in line with her constitutional role to aid civil authority in combating terrorism, armed banditry, kidnapping, cultism, civil unrest, ethno religious crisis as well as other security challenges. The increased incidents of these challenges bedevilling the nation in recent time have become worrisome.
3. In view of these, the Nigerian Army in conjunction with US Army African Command will be holding this year’s African Land Forces Summit with the theme “Unity Is Strength: Combating Africa’s Security Challenges”. The summit will afford military leaders of African countries the opportunity to strengthen existing relationships, develop new ways of tackling security challenges on the continent and further facilitate cooperation.

4. It is pertinent to also state that, the United States military through the auspices of the African Command (AFRICOM) holds annual conferences called the African Land Forces Summit (ALFS) with allied countries. The last ALFS 2017 held in Malawi. The forum affords countries the avenue to share experiences on global terrorism and forge common approach to combating transnational threats and crimes such as small arms proliferation and terrorism. The summit is the single largest gathering of African senior military leaders on the continent. It also afford them the opportunity to interact with the aim of strengthening existing relationships and developing new ones.
5 The Summit is a land mark event which the Nigerian Army will be co-hosting with US Army Africa (USARAF). It will provide the NA the forum to showcase its capabilities, project its image and military might to the largest gathering of African senior military leaders on the continent. This is in addition to providing a platform for countries to share experiences on global terrorism and other security challenges such as transnational threats and crimes.
6. The event is sponsored by the USARAF while the Nigerian Army (NA) will be the co-host. During the summit, all African Army Chiefs and Chiefs of other nations from Europe and the Americas including the USA will be in attendance. The ALFS 2018 is scheduled to hold at the main Auditorium, Transcorp Hilton Hotel, Abuja.
7. The opening and closing ceremony are slated for 16 and 19 April respectively at the Transcorp Hilton. Part of activities lined up for the summit include military demonstration exercise that would entail firing and the use of pyrotechnics. The exercise will take place at 176 Guards Battalion, Gwagwalada commencing with rehearsals on 12 and 14 April 2018, while the grand finale will take place on 17 April 2018. Residents of the area are advised to remain calm as all safety measures have been put in place to protect lives and property. Topical issues such as “Command and Control in African Operational Environment”, Collapse of the Islamic State in Iraq and Syria Caliphate and Implications on African Stability and Security” among others will be discussed.
8. Participants will be drawn from all African armies; western partners as well as representatives from the three Services, the Nigeria Police and DSS, Principal Staff Officers from AHQ, Corps Commanders and General Officers Commanding will be in attendance. Also, some professors and members of Academia, and stakeholders will attend.
9. Gentlemen of the press, you have always been partners in progress hence we are using this opportunity to request you to give this event the widest publicity in your medium. On this note, on behalf of the Chief of Army Staff, officers and soldiers of the Nigerian Army, I thank you all for honouring our invitation. I will now take questions from you and clarify doubts if any.