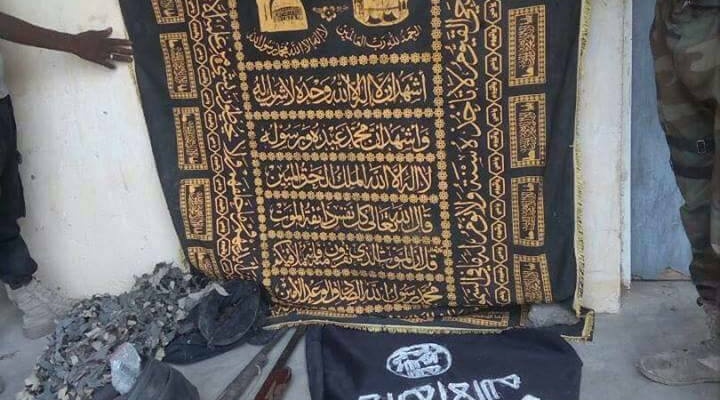 May 17, 2018Operation Lafiya DoleComments Off on TROOPS KILL 15 BOKO HARAM INSURGENTS IN SEPARATE OPERATIONS … As aged man kills self in suicide bombing

In two other separate encounters with the fleeing insurgents in Firgi and Moula, both in Bama and Dikwa Local Governments Areas of Borno State, troops also ambushed and neutralised 4 Boko Haram insurgents who were fleeing troops ‘ onslaught in the northern fringes.

The clearance operations also led to the recovery of one Single Barrel Gun, one Dane gun and one locally made pistol. Other items recovered from the dislodged insurgents include 4 Motorcycles, motorcycle spare parts, 2 tricycles, 6 pumping machines, and 2 power generating sets. Additionally, the valiant troops captured 2 Boko Haram flags, a pair of Camouflage uniform, a pair of combat boots, a Camera, a bag of mechanical tools and medications.

Four men, 33 women and 16 children were rescued by the troops from the insurgents’ hideouts . The rescued hostages are currently being profiled for subsequent hand over to officials of the Internally Displaced Persons Camp for documentation and administering. In another development, an aged Boko Haram terrorist yesterday killed himself in a suicide bomb attack around a telephone mast in Konduga in Borno state. The elderly man pretending to be weak and feeble was being searched by men of the Civilian Joint Task Force, when he detonated a suicide vest contained in a bag he was carrying. Unfortunately three Civilian Joint Task Force members paid the supreme price in the incident. The wounded have been evacuated for medical attention.

Our hearts go out to those who lost their lives as well as those injured in the callous attack.

This singular incident points to the variation in the tactics of the Boko Haram terrorists in their uncanny resolve to deceptively infiltrate communities and towns to mindlessly attack vulnerable and soft targets. Aside using women and children, the terrorists are now engaging the aged in suicide bombing as witnessed in this recent incident. They have also been detected to now appear clean and Well dressed to look unsuspicious and enable them gain access to targets marked for suicide attack. Some of the terrorists have also been found to now conceal their suicide vests by wearing it on the thigh rather than the waist to appear less bulky and evade detection when searched.

In view of these developments, members of the public are please urged to be vigilant and discerning as they go about their normal daily routines and activities.