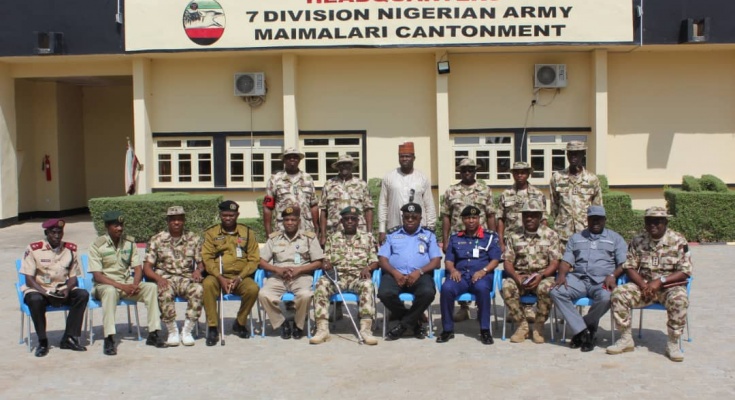 1. The authorities of the Nigerian Army has  met with other Heads of security agencies in Maiduguri, Borno State, calling for more synergy and cooperation towards evolving new strategies in the ongoing fight against insurgency and other sundry crimes.

2. Speaking during the strategic meeting, the Acting General Officer Commanding (GOC), 7 Division, Brigadier General Abdulmalik Bulama Biu stressed the need for such routine interaction between all security stakeholders within the state, aimed at reinforcing the already existing cooperation and synergy as well as level of information sharing among them.

3. He commended the agencies for judiciously discharging their  responsibilities. He also  charged all security outfits in the state to step up their efforts and to review their various strategies as the dry season and political climate approaches.

4. The Acting GOC reminded the policy makers to be more proactive and not to allow any breach of security, adding that  security agencies must be decisive in all actions and checkmate some of the unholy political gatherings.

5. Responding, heads of security agencies present lauded the Army for the meeting, describing it as timely. They took turn to highlight the activities of their agencies while identifying different areas that needed collective support of the Nigerian Army and other security outfits to effectively combat the menace of Boko Haram Terrorists as well as other sundry crimes.

6. The meeting ended with a resolve for all to redouble efforts and work in synergy and cooperation.

8. You are please requested to disseminate this information to the general public through your medium.

9. Thank you for your kind cooperation.