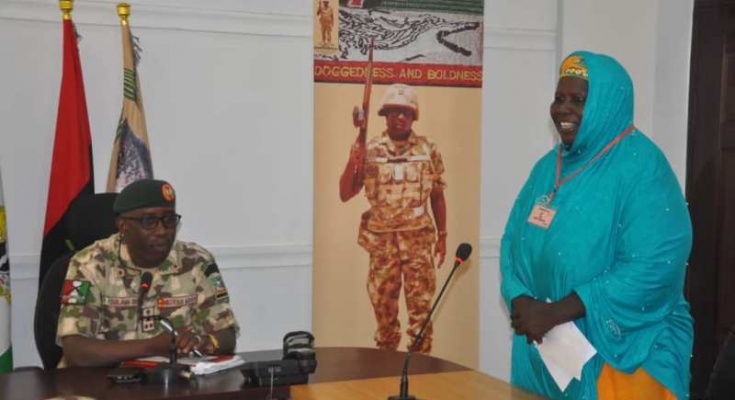 1. The Nigerian Army has again been applauded for its counter insurgency efforts towards the restoration of peace and security of lives and property in Borno State as well as the entire North East of Nigeria.

3. She stated that, women in the state have been the major beneficiaries of the achievements recorded so far by the Army, emphasizing that a large number of them have gained freedom from the Boko Haram captivity and reunited with their loved ones in the recent past.

5. She stressed that, same applied to several other women who received threats to their lives during the insurgency but for the gallant efforts of Nigerian Army, troops fought to rescue and get them freedom.

6. The Chairperson added that women of Borno appreciate the good works of the Army as well as sacrifices made by the troops with their lives for peace to reign.

7. She lamented the dwindling progress of the chapter and in the entire North East and thanked the Army for their tremendous contributions for liberating especially the women and the entire populace from the jugular of Boko Haram Terrorists (BHTs).

8. She promised to sustain the existing cordial relationship among them and solicited for the support of the Nigerian Army in human capital development to impart on performances of children and women within the state.

9. Responding, the Acting General Officer Commanding (GOC) 7 Division Brigadier General Abudulmalik Bulama Biu thanked NAWOJ for the visit. He assured them of the Army’s support to the Association. He recalled that two staff of LAFIYA DOLE Radio 108 FM, who are members of NAWOJ Borno State Chapter have been sponsored to attend their workshop abroad.

10. He observed that, the Nigerian Army and members of the Fourth Estate of the realm have partnered favourably through timely information sharing and reportage of counter insurgency narratives in the North East.

11. He further reiterated that, the situation on ground is multidimensional, urging the Association to be proactive and positive in the performance of its role of timely information dissemination to diverse mass audience.

12. He also charged them to contribute their quota to the counter insurgency efforts through balanced reportage.

13. Present during the visit were some Principal Staff Officers, General Secretary NAWOJ Pauline Kuje, among others.

14. You are please requested to disseminate this information through your medium to the public.

15. Thank you for your kind cooperation.