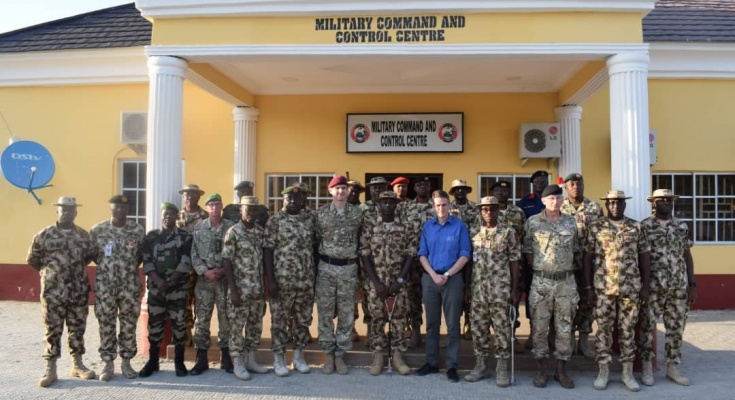 Nov 16, 20187 DivisionComments Off on UK SECRETARY OF STATE FOR DEFENCE VISITS THEATRE COMMAND … Assures of collaboration

1. The United Kingdom Secretary of State for Defence, Rt Hon. Garvin williamson has paid a visit to the Headquarters, Theatre Command Operation LAFIYA DOLE in Maiduguri.

2. Speaking during the visit, the Secretary of State commended the efforts of the troops of Operation LAFIYA DOLE for providing security and a conducive atmosphere for the people of the North East Nigeria, United Nations Humanitarian Agencies and other civil organisations to carry out their activities.

3. He further stated that, the already existing collaboration between the Nigerian and United Kingdom militaries would be sustained adding that, aside providing Counter Improvised Explosive Devices training to troops in support of the operations, the United Kingdom will explore other areas of partnership with the Nigerian military.

4. Also speaking, the Chief of Training and Operations, ‘Army’ Major General Lamidi Adeosun lauded the supporting role of the UK Support and Liaison Team in the ongoing operations, noting that talks are at advance stage on setting up a Joint Planning Centre for Counter insurgency operations.

5. In his remarks, the Theatre Commander lauded the support of the British Liaison Support Team for their contribution in the fight against terrorism. He stated that, the Nigerian military remains highly professional in the discharge of its constitutional roles and in the conduct of Counter terrorism and Counter insurgency operations in the North East.

6. Present during the visit were some Principal Staff Officers of the theatre command.