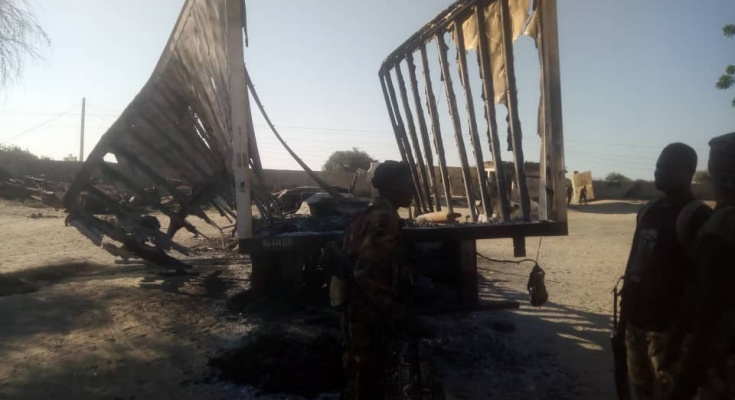 Troops of Operation LAFIYA DOLE located at Gudumbali in northern Borno State on Friday 15th December 2018 repelled an infiltration by suspected Boko Haram terrorists that came disguised as civilian Internally Displaced Persons and inserted themselves in the community.

The terrorists took advantage of the ongoing distribution of relief materials by the Nigerian Army at Gudumbali and opened fire on troops location which was followed by rapid fire from other terrorists in gun trucks along Gudumbali-Kukawa axis. The trucks conveying the relief materials were set ablaze. However, the troops however fought gallantly and outmanoeuvred the attackers and inflicted heavy casualties on them.

Unfortunately, a soldier paid the supreme price during the encounter, while another was wounded in action. A Cobra Armoured Personnel Carrier and a truck belonging to the unit were damaged.

Similarly, the troops have recovered bodies of some of the neutralised terrorists, large quantity of ammunition and 8 Rocket Propelled Grenades Charges.

The troops have since been reinforced and normalcy has been brought to the general area.