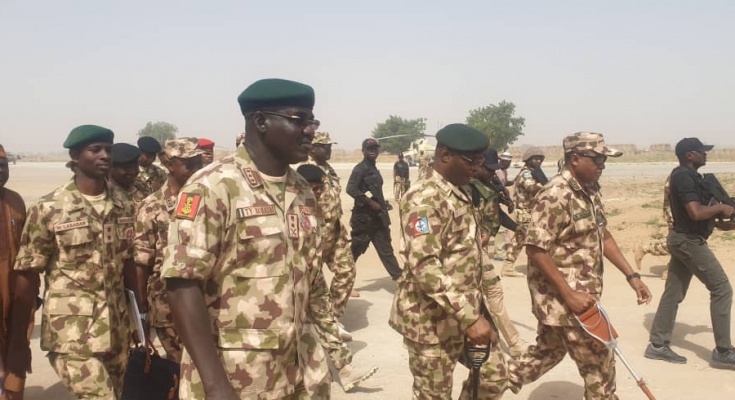 The Chief of Defence Staff (CDS), General Gabriel Olonisakin, along with the Chief of Naval Staff (CNS), Vice Admiral Ibok-Ete Ekwe Ibas, Chief of the Air Staff (CAS), Air Marshal Sadique Abubakar, accompanied by some Principal Staff Officers from the Defence and Services Headquarters, today, Saturday 22nd December 2018, visited Operation LAFIYA DOLE theatre in the North East. The Chief of Army Staff (COAS), Lieutenant General Tukur Yusuf Buratai, who has since been in the theatre of Operation received the CDS and the Service Chiefs on arrival.

During the visit, the CDS was briefed by the Theatre Commander, Operation LAFIYA DOLE, Major General Benson Akinroluyo, on the operational activities of the troops in the ongoing counter terrorism and counter insurgency operations. The CDS and the Service Chiefs equally had interactions with other field commanders who also gave updates on the operational activities in their respective areas of responsibility.

The visit which was essentially to evaluate the fight against terrorism and insurgency in the North East, ended on a successful note as it was entirely hitch free.

Please disseminate this information to the general public through your news media.