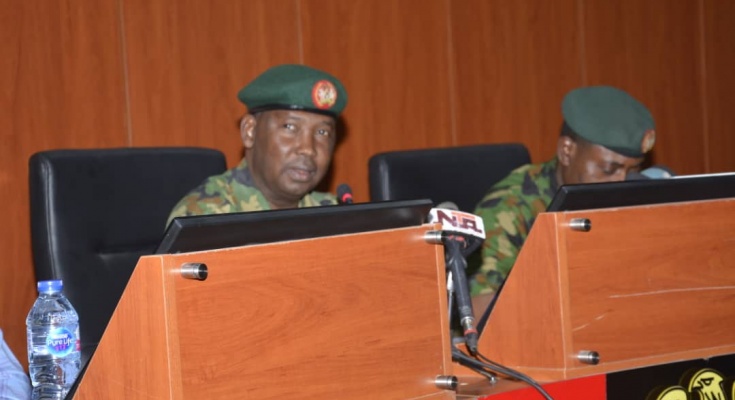 In the early hours of today, there was an attack by unconfirmed number of Boko Haram terrorists using Person Borne Improvised Explosive Device (PBIED) at Jidimari community in Jidari Polo area of Jere Local Government Area of Borno State. This is in their highly desperate, orchestrated and collaborative resolve with their cohorts and sponsors to scuttle the 2019 General Elections.

Consequently, troops of 251 Task Force Battalion in conjunction with Civilian JTF immediately repelled the attack, mopped up and cleared the general area.

The encounter led to the elimination of 3 boko haram terrorists and recovery of 2 AK 47 rifles. Unfortunately, 4 innocent civilians lost their lives as a result of terrorists gun fire in addition to lethal explosion arising from PBIED mainly targeted at a mosque at a prime time of early morning prayers.

The carrier of the PBIED and a CJTF who strived to prevent the suicide bomber from accessing the mosque also lost their lives due to the IED explosion.

At the moment, troops have dominated the area, cordon and search as well as exploitation are concurrently ongoing.
Situation in the area is now calm. Normal routine activities are gradually going on. The army wishes to reiterate its resolve to ending the remnant of boko haram criminals thereby bringing an effective and an enduring end to terrorism and insurgency in Nigeria.

Members of the public are please enjoined to be more alert and avail security agencies of any observed or suspicious movement of persons or items. Doing so will indeed assist security agencies to effectively deal with the challenge.