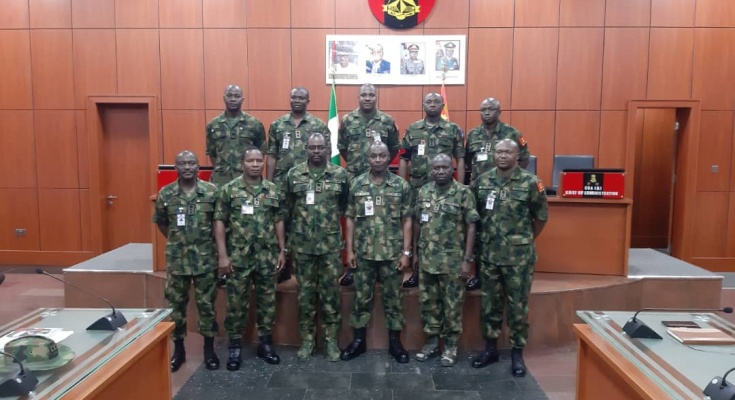 Mar 15, 2019Press ReleaseComments Off on NIGERIAN ARMY SETS UP COMMITTEE TO INVESTIGATE ALLEGATIONS OF MISCONDUCT AGAINST HER PERSONNEL DURING THE 2019 GENERAL ELECTIONS

As a way of ensuring that NA troops deployed for election security duties during the 2019 General Elections conducted themselves within laid down Rules of Engagement and the Code of Conduct, the NA has set up a 9-member investigative committee, headed by Maj Gen TA Gagariga with Brig Gen JM Ali, Brig Gen GO Adeshina, Brig Gen MA Obari, Col AT Bitiyong, Col A Tanko and Col WA Bakare as members and Lt Col PAJ Ebuk as Secretary to investigate all allegations of misconduct against the NA during the just concluded general elections. The committee is to submit its report not later than 31st of March, 2019.

The committee, which has already commenced action, was inaugurated by the Chief of Administration (Army), Major General KAY Isiyaku on behalf of the Chief of Army Staff (COAS ) Lieutenant General Tukur Yusuf Buratai and admonished to carry out their duties objectively, fairly and transparently in line with its Terms of Reference.

The committee’s Terms of Reference centered on thoroughly investigating the activities, actions and/or inactions of NA Personnel in all the States that alleged one infraction/wrong doing or the other.

The Committee is also to collate and thoroughly analyze all reports to determine the veracity of the allegations including the alleged assassination attempt on Rivers State Governor and the circumstances that led to the shooting to death of Lt Kurmi as well as that leading to serious injuries to an officer and some soldiers in the State.

The Committee is further mandated to visit all States where issues have been raised about the conduct of NA during and after the elections and also interact with Civil Society Organizations, sister security agencies and State Governors with claims against the Army.

It would be recalled that the COAS, Lt Gen TY Buratai has on many fora, consistently (both in words and actions), soundly indicated that, under his watch, NA personnel must remain apolitical, respect human rights and abide by the rule of law in all its official engagements within or outside Nigeria and in or out of conflict situation. NA troops were deployed for the elections under Operation SAFE CONDUCT that was set up to provide support to the NP and other security agencies to ensure hitch free and successful elections in the country.

The Chairman of the committee, Major General TA Gagariga has assured the COAS and all Nigerians of the commitee’s commitment, resolve and determination to objectively and professionally address the major issues as contained in the Committee’s Terms of Reference.