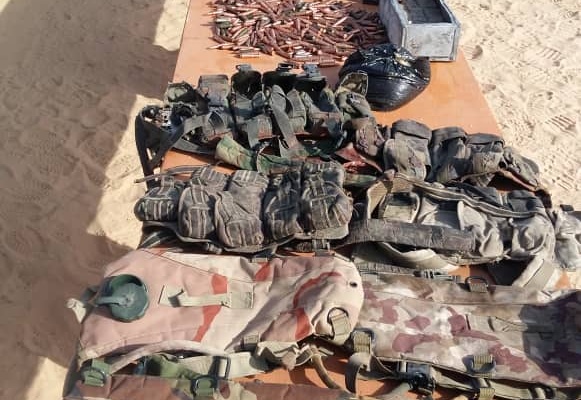 Troops of 72 Special Forces Battalion Makurdi, deployed at Yelwata, in Guma LGA which is a Border town between Benue and Nasarawa State while on patrol along Road Yelwata-Kadarko to monitor post election activities in that axis had an encounter with some suspected armed robbers in the early hours of today the 15th of March 2019.

The suspected armed robbers were dressed in military desert camouflage and robbing motorists along the road. However, the gallant troops of the Battalion engaged the robbers in a gun battle which resulted in the elimination of one of the armed robbers during the encounter, while others took to their heels.

Similarly , some cultists who have been terrorising the North-Bank general area in Makurdi metropolis were arrested by Intelligent Operatives of 72 Special Forces Battalion deployed within the town to monitor post election activities. The suspects are Mr Shuaibu Sale, Mr Umar Sule and Mr Idris Bawa. Items recovered from them incude:
a. One locally made revolver pistol.
b. One round of 9mm
c. A poly bag containing weeds suspected to be Indian Hemp.

Members of the Public are reminded to be security conscious at all times and enjoined to report any suspicious activities of or movements of individuals or groups to the nearest law enforcement agents for prompt action.

Forwarded herewith are some pictures of the incidents for your publication please.