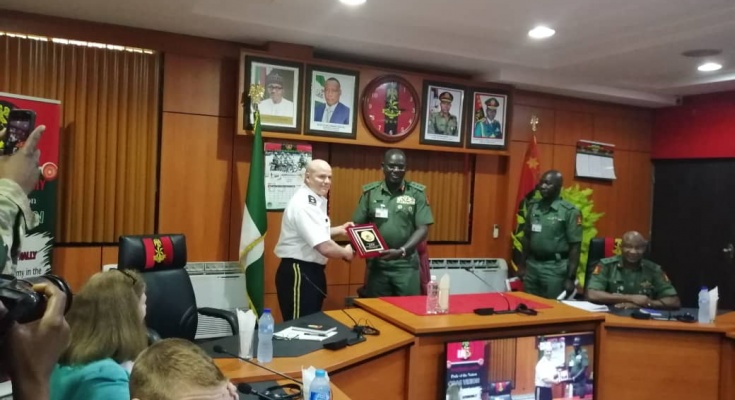 He gave the commendation today the 19th of March 2019 when he paid a visit to the Chief of Army Staff (COAS) Lieutenant General Tukur Yusuf Buratai at the COAS Conference Room, Army Headquarters Abuja.

General Roger informed the COAS that he is in Army Headquarters to formally inform him of his appointment and to seek for further collaboration with the Nigerian Army in the areas of training support, procurement and logistics.
“I am committed to a deep long time relationship with the Nigerian Army”.

In his response, the COAS thanked the US Army Africa Command for the assistance to the NA.

According to him “We must continue to collaborate to make sure we synergize and work closely on counter terrorism/insurgency training. We have created NA Special Forces Command with Headquarters in Nasarawa State and Special Forces School at Buni Yadi, Yobe State which will certainly require a lot of support from our partners”.

He also assured the Commanding General of the desire of the NA to strengthen the existing agreement with the US Africa Command particularly in the areas of training, logistics and other defence related matters such as counter terrorism and counter insurgency training.

General Buratai congratulated him on his well deserved appointment and assured him of the NA continuous support and collaboration towards achieving mutually beneficial relationship.