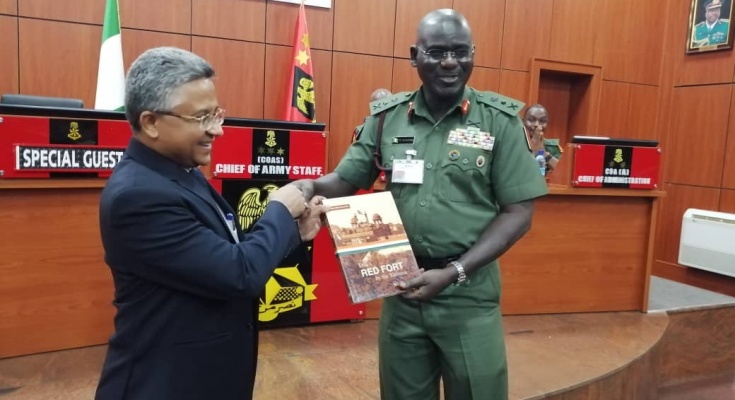 The High Commissioner of India to Nigeria, Mr Abhay Thakur has paid a working visit to the Chief of Army Staff (COAS) Lieutenant General Tukur Yusuf Buratai today Wednesday the 20th of March 2019 at the Army Headquarters Conference Room Abuja.

Mr Thakur was accompanied by the India Defence Attache to Nigeria Colonel Derby Sachen during the visit. He used the opportunity to commend the NA for its role in the just concluded 2019 General Elections.

He described the role of the NA during the elections as professional and patriotic which is inline with global best practice and promised to sustain cooperation with the NA in the areas of training, defence procurement and sharing of intelligence that will assist Nigeria in the ongoing fight against terrorism.

According to him “Indian Army has a long time, historical relationship with the NA. It is my desire to solidify the relationship in the areas of strengthening the capacity of Nigerian defence system through procurement of adequate platforms that suit Nigeria”.

Mr Thakur also posited that defence training and research is one of his areas of concern. He also stated that the first Counter terrorism dialogue between India and Nigeria is underway.

“We will continue to support the NA in providing technical assistance, training, capacity building and Defence strategies and platforms to enhance its capabilities in tackling the myriad of security challenges facing Nigeria”, he added.

In his response, the COAS thanked the visiting High Commissioner whom he desribed as a well seasoned diplomat that has served Indian Government in many capacities both locally and internationally. While congratulating him on his recent appointment as High Commissioner of India to Nigeria, General Buratai appreciated the long time diplomatic and military relationship between Nigeria and India. He noted that Indian army oficers were pioneer instructors in the Nigerian Defence Academy.

“We shares the same military ethics, culture and traditions. We will be looking forward to technical assistance, and your experience in the area of military wares such as tanks, Army aviation and special forces training is important in our war efforts to ending terrorism/insurgency in Nigeria”.