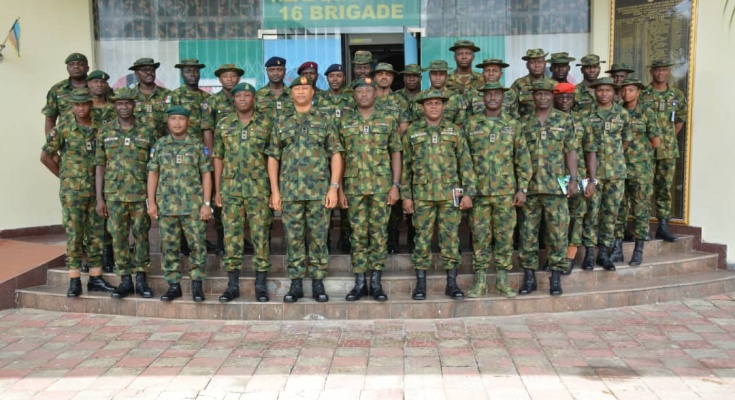 Following a routine redeployment of officers of the Nigerian Army, Brigadier General Obinna Onubogu assumed command of 16 Brigade Nigerian Army on 27 March 2019.  Headquarters 16 Brigade is located in Bayelsa State. During a grand colourful military ceremony, the new commander praised the efforts of the immediate past commander Brig Gen Kevin Aligbe in establishing and kickstarting the operations and infrastructural development of the Brigade. The handover ceremony was followed by the hoisting of a new flag signifying the commencement of the new command.

Brigadier General Obinna Onubogu is a member of 41 Regular Course of the prestigious Nigerian Defence Academy. The senior officer has held various command, staff and instructional appointments. Prior to his appointment, he was the Deputy Director Plans at the Army Headquarters Department of Policy and Plans. He has also served as Chief of Staff, 27 Task Force Brigade, Operation LAFIYA DOLE.

Brigadier General Obinna Onubogu was the pioneer Commander of the Nigerian Contingent to the ECOWAS Mission in Guinea Bissau as well as Deputy Force Commander for the Mission. He holds a Master of Science degree in Security and Strategic Studies and a Post Graduate Degree in Peace and Reconciliation Studies, among other qualifications. He is a member of various professional bodies amongst which include the Nigerian Institute of Management.

3.   You are please requested to use your medium for the awareness of the general public.