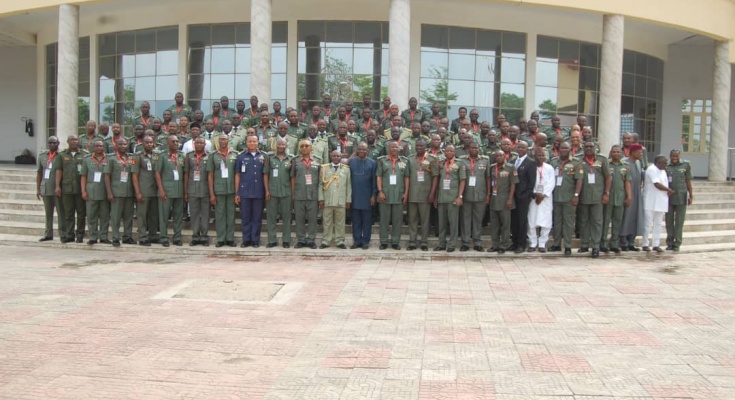 Apr 01, 20197 Division, Breaking NewsComments Off on COAS KEY NOTE ADDRESS AT THE ARMY HEADQUARTERS DEPARTMENT OF STANDARDS AND EVALUATION SEMINAR ON REGIMENTATION AND COMBATING SECURITY CHALLENGES ASSOCIATED WITH FORESTS AND PROTECTED AREAS 1 APRIL 2019

1. It gives me great pleasure to see history being made today with arrays of stakeholders gathered together to deliberate on matters that concerns our institutional way of life, the ecosystem, the challenges of security and its effect our national security. The main thrust of the Seminar is the strengthening of regimentation through the maintenance of mascots by all existing units as well as introduction of mascots to all the newly created units and formations. The initiative will require close cooperation of forest and animal conservative organisation who are responsible for protected areas all over Nigeria. Ordinarily one would wonder what could be the point of convergence between the regimentation in the Army, our floras and faunas, forests and national security. To give reasons for this seminar permit me to delve into history for a better understanding.

2. As you all know the Army as part of its customs ethics and tradition adopts mascots as part of its regimentation. Mascots are objects, animals or persons that are chosen as a symbol of a regiment and are assumed to bring good luck. The word ‘Mascot’ originates from the French term ‘Mascotte’ which means lucky charm. It was first used in 1867 and popularized by a French Composer Edmond Audran. The earliest record of the customs of the Army adopting Mascot is that of a goat belonging to the Royal Welsh Fusiliers in the 1775 American War of Independence. In our own clime, warriors of old go to war with dogs leading in front to give early warning. This age long practice and tradition is therefore part of Army regimentation all over the world and the Nigerian Army is not an exception. The affinity between soldiers and animals are assumed to bring good luck. It is generally believed that the spirit lodged in the mascots propels a fighting force to victory. This belief creates high level of morale and psychological spirit of courage in troops.

3. Domesticated animals and some tamed wild fauna such as dogs, goats, horses, mules, camels, peak corks, eagles, jackals, foxes, lions, tigers to mention but a few live in the forests and are important aspects of the overall ecosystem. It is therefore imperative to note that all animals and plants in the ecosystem co-exist to balance each other out to ensure a perfect nature. It is for this purpose that environmentalists, scientists, Park Rangers, Park Wardens, Forest Rangers and Vet Doctors are required to ensure that they preserve the continual existence of these floras and faunas. In effecting these Forests, Wild Life and National Parks are designated in various countries of the world for the protection and preservation of these animals as well as the Forests and Parks. National Parks are actually designated protected areas that are clearly defined geographical space, recognized, dedicated and managed, through legal or other effective means, to achieve the long-term conservation of nature with associated ecosystem services and cultural values. The variety of our native species and the ecosystem forms the conservation of biodiversity which is a vital aspect needed in safeguarding our economy, cultural, spiritual and aesthetic values. These National and Wild Life Parks provides a safe haven for our animals and native plants. They also serve as places of tourism that if well harnessed would be a source of foreign exchange earnings.

4. Unfortunately today most of these animals are being poached illegally and our forests and parks such as Kuyan Bana, Dan Saudau and Sububu in Zamfara State, Allawa Games Reserve, Pandogari and Kagara Forests in Niger State, Falgore Games Reserve in Kano State. Others are Allargano, Sambisa, Chingurmi-Bugama axis of Chad Basin National Parks in Borno State, Guljba Forest in Yobe State, Rugu Forest in Katsina State, Lame Bura and Balmo Forests in Bauchi State that are now sanctuaries for criminals, kidnappers, armed bandits, insurgents and terrorists. Forests and Wild Life Park managers have been sacked from their jobs. There is gradual deforestation which in itself constitutes danger for the ecosystem. All these have constituted a challenge to our national security thus necessitating the setting up of Op LAFIYA DOLE in the North East and other operations nationwide. As I speak now, Ex HARBIN KUNAMA IV is being launched in Gusau, Zamfara State. The Exercise will later dovetail into real time operation. This Ex will involve large scale employment of personnel and logistics movement to cover Suburu, Kagara, Gando, Dumburum forests in Katsina, Sokoto and Zamfara states respectively. The aim is to flush out bandits and insurgents groups from some identified forest areas. The Exercise/Operation will be intelligent driven and highly mobile in nature while integrating other security agencies and collaborating with paramilitary organizations to enhance the posture of the troops and the successful conduct of the operation. There is the need therefore for all stakeholders to come together to deliberate on how to salvage our forests and parks from poachers, insurgents, terrorists, kidnappers, cattle rustlers and armed bandits.

5. The Nigerian Army in retrospect established the Barracks Investment Initiative Programme in which personnel were encouraged to engage in agro-allied activities and ventures in which animals are kept in ranches within our barracks. I have also just directed the Department of Army Standards and Evaluation to ensure that my directive for the establishment of Mini Zoos in all NA Barracks is enforced to the later. Units and formations are encouraged to get animals that include their mascots and some others within their Areas of Responsibilities to populate the Zoos. This will go a long way to preserve our local animals. Similarly all battalions and regiments are expected to have their own mascots duly approved by the Department of Army Administration with allotted Army Numbers for payment of personal emolument required for their upkeep. I have also directed that the Sambisa Forest should be turned into an Ecosystem Resort Centre where war relics of the past few years in the North East will be maintained as historical sites for tourism that will attract scholars and tourists as well as a revenue generating venture for the country.

6. These Seminar therefore would not have come at a better time than this when our Nation is poised more than ever before to attain a change for the future. We need to look into areas of economic diversity. The Theme of this Seminar which is “Enhancing Synergy between the Nigerian Army and National Park Service: National Security in Perspective” is therefore apt. I am also elated to note that the 4 papers that would be delivered by erudite scholars who are highly revered professionals will stimulate rich interactive sessions that will lead to a workable communiqué. We must therefore work in unison to make our future assured. The Nigerian Army under my command will continue to collaborate with all stake holders to achieve my vision “to have a professionally responsive Nigerian Army in the discharge of its constitutional role”.

7. One of the cardinals of my vision is acceptable civil-military relation which can be achieved through responsiveness to inter agency cooperation. It is aimed at enhancing responsiveness and professionalism in the Nigerian Army’s effort at providing aids to civil authority. The Nigerian Army has therefore continued to collaborate with other stakeholders to guarantee national security necessary for national development. The National Park Services being one of such stakeholders manages all national parks as well as protect these sites for the development of Nigeria. The activities of bandits and criminal elements in such protected areas across the country through illegal logging, cattle rustling and other criminal vices has made these areas uninhabitable for animals. These activities have driven animals away from various protected areas which hitherto were their natural habitat. It is therefore my intention to bridge the insecurity occasioned by the gap created by these challenges to our national security through enhanced collaborations with relevant stakeholders.

8. In conclusion, I want to say that you must have identified the nexus between regimentation in the Army, our floras and faunas, forests as well as national security. I want to appreciate all those who have turned up for this Seminar. This is an opportunity for us all to be more involved in regimentation, synergize with relevant stakeholders to preserve our floras and faunas, make our forests safe and build capacity to develop the needed progress for national Security. I want to commend the Chief of Army Standards and Evaluation Nigerian Army for organizing this Seminar and I want to equally enjoined you all to have a successful seminar.

Thank you and God Bless. 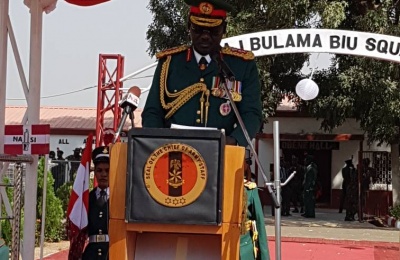