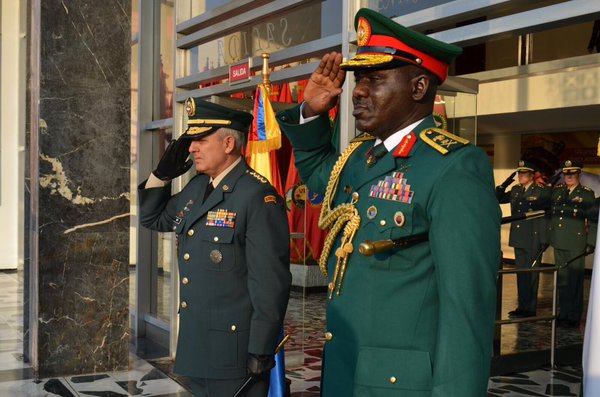 Nigerian Army officers to major military formations/institutions of the Armed Forces of Colombia. The visit which was the first since his assumption of office was to offer the delegation an opportunity to inter-face with the Colombian Armed

Forces on their efforts so far in resolving the armed insurgency and possible lessons for the Nigerian Army.

The COAS and his entourage on arrival at the Colombian Army Headquarters were received by the Colombian Chief of Army Staff, General Albert Jose Mejia, who briefed them on different categories of operations by his country’s Army, as well as drew analogy between what his country is going through and that of Nigeria in justifying the visit of the Nigerian COAS. Highlights of the brief include the 50 year war against the Revolutionary Armed Forces of Colombia and other insurgent groups that have culminated in the ongoing peace talks, the deliberate effort by the Colombian military to unravel the identity of the various insurgent groups which composed of support groups, political groups, core fighting groups, leading to the decapitation of key leaders of the insurgents, the establishment of  joint operations, emphasis on civil- military cooperation to win the hearts and minds of the local population in areas where government presence were non-existent, among others.

The visit took the COAS and his entourage to formations, military institutions, aviation unit and the Engineer Corps of the Colombian Armed Forces.  It is pertinent to note that Colombia has been battling insurgency in the last 50 years. Consequently, the COAS visit to Colombia was primarily to meet minds with his Colombian counterpart on the best strategies to combat insurgency in Nigeria.