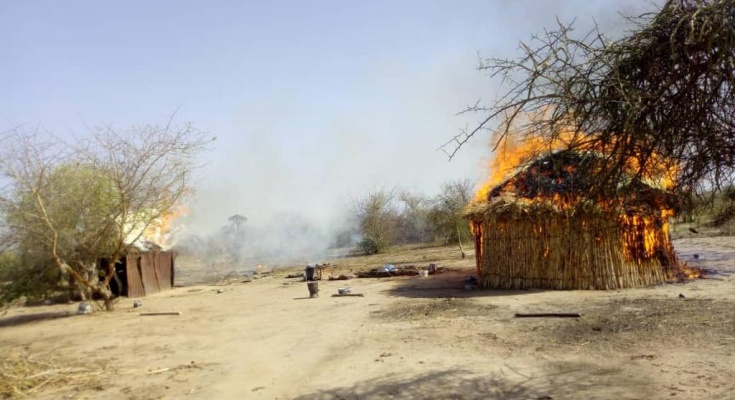 Troops of 121 and 192 Battalions of Operation LAFIYA DOLE in collaboration with Civilian JTF and local vigilantes, had on the 10th of May 2019 continued with clearance operations to end Boko Haram terrorism. Consequently, the troops effectively cleared Surdewalla, Ranwa, Baladayo, Sabon Gari and Shetimeri villages of Borno State in a simultaneous operation code named “Operation HARD STRIKE”.
At Ranwa 11, contact was made with the terrorists, three of them were neutralized, while many were obviously wounded and others escaped.

Simultaneously, troops of 192 Battalion advanced along Sabon Gari and Shetimeri villages where they cleared a scout of Boko Haram terrorists. A make up shift shelter for suspected insurgents was destroyed.

Similarly, on the same Friday the 10th of May 2019, based on credible intelligence, troops of 212 Tank Battalion under the operational command of 7 Division Garrison deployed at Forward Operation Base Gajigana ambushed terrorists attempting to infiltrate Gajigana town/troops’ location. Uncomfirmed number of terrorists were exterminated. Two soldiers were wounded during the encounter, are stable and receiving treatment in a military hospital.

There was no casualty on the troops or the Civilian JTF.

The General Officer Commanding 7 Division Brigadier General Abdulmalik Bulama Biu, while on assessment visit to FOB Gajigana, enjoined the troops to remain decisive and intensify efforts in eliminating the remnants of the terrorists. He also conveyed the commendation of the Chief of Army Staff to them and the entire troops of the Theatre Command for the latest successes in the fight against terrorism.

Nigerian Army used this medium to thank those who provided the information that led to the recent successes achieved so far, and urged members of the public to continue to be more forthcoming with useful information about the terrorists in their respective localities to the nearest army location or security agency for necessary action.