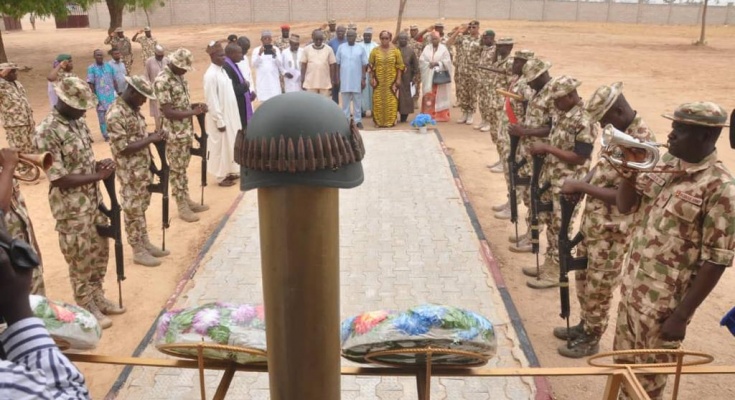 The Chairman House of Representatives Committee on Army, Honourable Rimamnde Shawulu Kwewum on Wednesday, 16 of May 2019, led other members of the House Committee on an oversight function to the Headquarters, Theatre Command, Operation Lafiya Dole at Maimalari Cantonment Maiduguri, Borno State.

On arrival, the Honourable members proceeded to Maimalari Military Cantonment Cenotaph and Cemetery, where they paid respect/tribute to the patriotic troops of Operation Lafiya Dole, who made the supreme sacrifice in the fight against terrorism in the North Eastern part of Nigeria.

Also, the House Committee members commiserated with the Chief of Army Staff (COAS), Officers and Soldiers of the Nigerian Army (NA) over the loss of the gallant men. The Chairman, on behalf of the members, expressed condolences to all the personnel of Operation Lafiya Dole, especially the families of the fallen heroes. He commended the efforts and successes of the military in the conduct of the operation inspite of the occasional setbacks.

According to him, “the committee deems it necessary to visit the Theatre at a time like this, to enable members get first hand and true situation and challenges been faced in the war against terrorism, as well as to see the conditions of the troops in the front lines in order to have a better ground for a realistic and objective legislative presentation to support the course of the military in the North East”.

The members were briefed by the COAS Lieutenant General Tukur Yusufu Buratai on the operational challenges and strategies employed in the recent operations particularly the ones done in conjunction with the Multinational Joint Task Force (MNJTF) Operation YANCIN TAFKI and HARD STRIKE which are still ongoing.

Lieutenant General Buratai appreciated the Committee for their support to the NA and further solicited for speedy legislative action on all matters concerning the request for acquisition of more hardware to enable the military perform optimally in the war against the remnants of terrorists in the North East Zone.

As part of the activities lined up for the visit, the honourable members were conducted to a visit to 7 Division Medical Services and Hospital in Maiduguri to see wounded troops that are receiving treatment at the facility. They also visited the Operation Lafiya Dole 107 Equipment Support Workshop to see the devastating impact of Improvised Explosive Devices on armoured and soft skin vehicles.

Earlier before the arrival of the Committe, the COAS had commissioned the new office extension block constructed by the Theatre Command Headquarters to provide more conducive office accommodation for its officers and other departments within the Theatre Command.