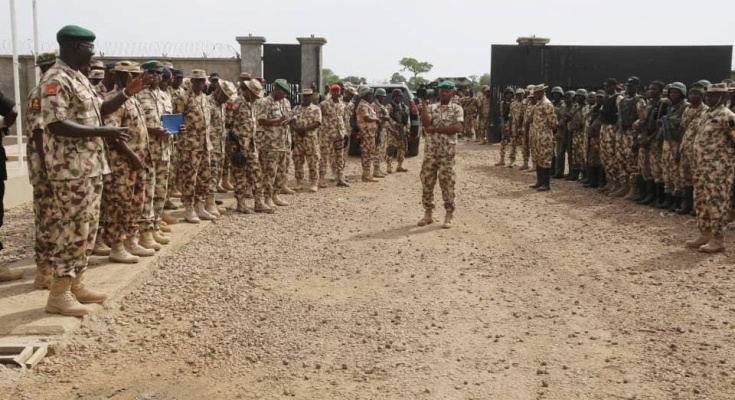 May 22, 2019Press ReleaseComments Off on NIGERIAN ARMY SET TO INDUCT MORE EQUIPMENT INTO THE THEATRE OF OPERATIONS

The Chief of Army Staff
Lieutenant General Tukur Yusufu Buratai has for some days now been in the North East theatre of operation where he visited troops at the Frontline. The latest was his visit to troops of Forward Operation Base at Buratai, Borno State on 21 May 2019, where he interacted with soldiers and urged them to remain focused and committed to bringing terrorism to an end.

During his address to the troops, General TY Buratai assured them that more equipment will be inducted into the mission areas to boost their efforts in the war against terrorism and other assorted insecurities in Nigeria.

He used the opportunity to assure them (troops) of his total commitment to their welfare and that of their families.

He charged them to strictly adhere to the extant Rules of Engagement and Code of Conduct which guide their activities while on Internal Security duties.