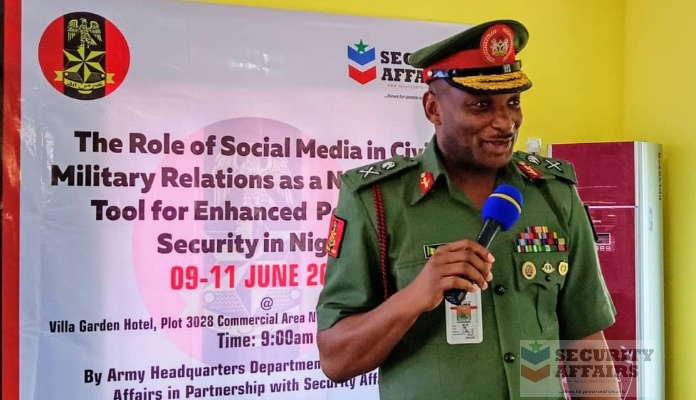 The Department of Civil Military Affairs, Army Headquarters in conjunction with Security Affairs Limited is presently holding a social media seminar on ” The Role of Social Media in Civil Military Relations as a Non- Kinetic Tool for Enhanced Peace and Security in Nigeria “. The seminar is holding at Villa Garden Hotel Owerri from 9-11 Jun 2019 for the South East Zone which is a consolidation of the earlier editions held in the South South, North East and South West. In attendance are the Chief of Civil Military Affairs , Maj Gen US Mohammed, Director Information Management, Department of Civil Military Affairs, Brigadier General BA Tsoho and personnel fron the Army Public Relations Department from 34 Brigade Obinze. Also in attendance are several journalists from both print and online media as well as staff and students of Department of Mass Communications from Federal Polytechnic Nekede Imo State. The seminar is aimed at creating a synergy between the media/online bloggers and influencers to report accurate information about the NA and its activities and improve their awareness on the implications of spreading negative information about the Military. The seminar was well received and it has broadened the knowledge of participants on the achievements of the NA in the last few years.