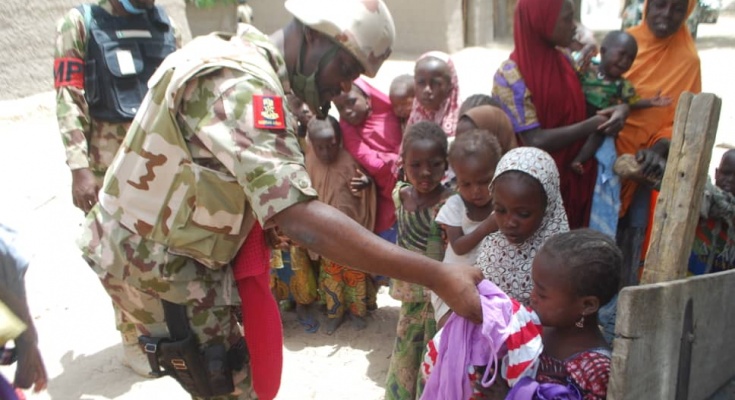 At the instance and the support of the Chief of Army Staff, Lieutenant General Tukur Yusufu Buratai, many Nigerian Army formations, and units have intensified efforts at providing infrastructures and social amenities for their host communities, all over the country. It is in line with this that 29 Task Force Brigade Nigerian Army, Benisheikh, embarked on humanitarian activities in its area of responsibility. The formation recently constructed a borehole each for Borgozo and Benisheik communities in Kaga Local Government Area of Borno State.

The Brigade being self-reliant in water purification, preservation and distribution, its troops are no longer exposed to the danger that may arise from getting water from other sources. Furthermore, the production and packaging of its water has enabled the formation to extend its humanitarian activities to include weekly distribution of water to the local communities bordering the Brigade’s headquarters. Similarly, the formation has also been assisting children with clothing and other educational materials in the communities with as well as portable drinking water on daily basis to other returning communities. It has also been distributing clothes to some children in the area, as well as feeding of over 2,000 of these children every week. The formation has also cultivated a Dates-Palm plantation in Borgozo, which is expected to be a source of food for the inhabitants of the village when they eventually return fully after the conflict.

Indeed, these have gone a long way in endearing the Nigerian Army to the locals, as well as enhancing cooperation between the military and the civil populace and free flow of accurate and timely information that has been very helpful to the brigade. Additionally, the kind support of the Chief of Army Staff that facilitated these humanitarian gestures for host communities, uplifted troops welfare and greatly boosted their morale, as they take joy in assisting their host communities through the humanitarian activities.