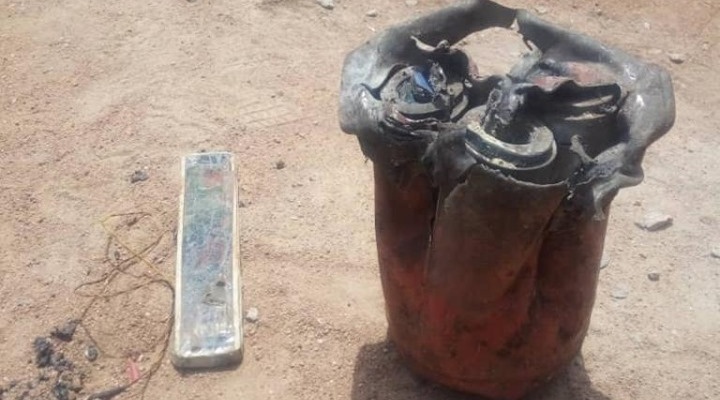 In its routine effort in providing and maintaining a secure, and steady passage of persons and goods as well as free vehicular movements along some notable roads/Main Supply Routes (MSR) in the North East, troops of 26 Brigade Garrison on patrol and escort duties of civilian merchants and commuters along Wala village and adjoining communities on Saturday, the 22nd of June 2019, had a fierce encounter with desperate terrorists’ ambush team desperately craving for food and other essentials.

Subsequently, intelligence revealed that the terrorists were informed by their informants of the troops movement in order to use the opportunity to grab foodstuff that they direly need for survival.

In order to consolidate on the gains achieved from the ambush clearance, further exploitation of the general area and beyond was undertaken with the troops of 121 Task Force Battalion dispatched to reinforce the 26 Brigade Garrison.

During advance, troops discovered 2 Improvised Explosive Devices (IEDs) concealed along their axis of advance. The IEDs were successfully detonated and cleared.

Despite the IED threat, the resilient troops proceeded further to ensure the general area is cleared of terrorists and explosives. There is no casualty on the part of Nigerian Army troops during the operation.

Instructively, the exploits in the ongoing operation “HALAKA DODO” is yielding successes. The Acting General Officer Commanding (GOC) 7 Division Nigerian Army Operation LAFIYA DOLE, Brigadier General Abdulmalik Bulama Biu on behalf of the Chief of Army Staff commended the troops for the successes achieved, and urged them to be more vigorous and decisive to end the insurgency. He also conveyed the assurance of the unyielding support of the Chief of Army Staff in this regard.