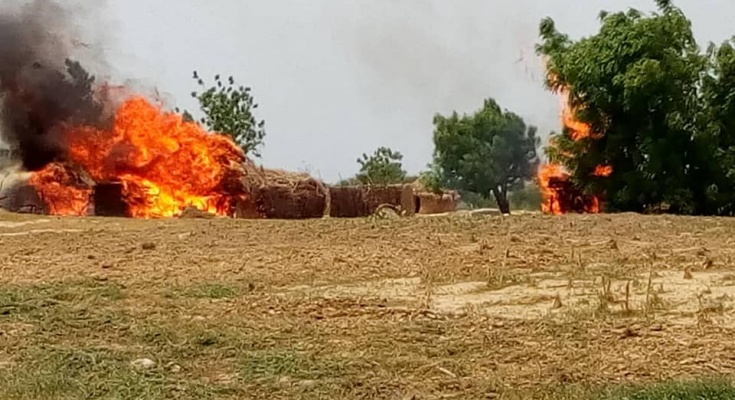 In continuation of the ongoing clearance operations tagged “Halaka Dodo” within Sector 1 Operation LAFIYA DOLE, the troops of 112 Task Force Battalion and 22 Brigade in collaboration with members of Civilian Joint Task Force and Vigilante group had on Saturday 22 June, 2019 conducted a robust clearance operation to Kobe and Boboshe villages respectively.

The troops discovered newly established camps at Dubula village with some bicycles and motorcycle tracks. The camp was destroyed and one of the terrorists was neutralised while trying to escape.

The following items were recovered: Two terrorists’ flags, two copies of Quran, One Generator Set and two bicycles. Additionally, 13 women and 26 children were rescued during the operation.

24 out of the children rescued were administered with polio vaccines by Nigerian Army Regimental Medical Officers in line with the Chief of Army Staff directive on the collaboration between the Nigerian Army and National Primary Health Care Development Agency to reach out to areas not captured in the polio vaccination exercise.

Similarly, the Acting Commanding Officer of 202 Battalion in conjunction with Civilian Joint Task Force, Vigilante and Hunters group conducted a robust offensive clearance operation to Tafana 1 and Tafana 2 villages.
The troops came in contact with some terrorists who fled their camps on sighting the approach of the ferocious troops in Mines Resistance Anti Patrol vehicles. Troops also neutralised the fleeing terrorists. During the operation, 2 men, 29 women and 25 children were also rescued.

In all the operations and victims so far rescued, it was observed that with the coming of the rainy season, farmers are preparing for the farming season, while the terrorists are also using women and children as farm slaves (labourers) in their farmlands to meet up with daily feeding challenges due to food drought in the forest sustained by the nobly ferocious operations of Nigerian Army troops.

In the circumstance, troops have been directed by the Chief of Army Staff Lieutenant General Tukur Yusufu Buratai to upscale their patriotism and continue to dominate the battle space with aggressive decisive clearance operations from all flanks to ensure the looming defeat of terrorists of whatever shades in North East Zone.

The Acting General Officer Commanding 7 Division Nigerian Army and Commander Sector 1 Operation Lafiya Dole, Brigadier General Abdulmalik Bulama Biu has on behalf of the Chief of Army Staff commended the entire indefatigable troops of the Division for the latest exploits and exemplary tempo of the operation and conveyed to them the assurances of Chief of Army Staff’s unrelenting support.