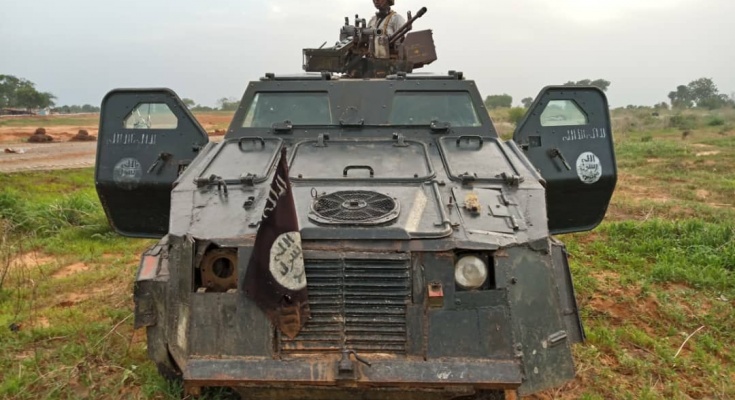 TROOPS AMBUSH TERRORISTS, INFLICT HEAVY CASUALTY ON THEM IN GONIRI

Jun 27, 2019Press ReleaseComments Off on TROOPS AMBUSH TERRORISTS, INFLICT HEAVY CASUALTY ON THEM IN GONIRI

Following aborted attempt by terrorists to infiltrate 120 Task Force Battalion location at Goniri, Yobe State, Sector 2 Operation LAFIYA DOLE, at about 1833 hours on Wednesday 26 June 2019, troops of the Battalion,
in a professional manner, – tactically waited for the terrorists to close into the killing range and opened heavy volume of fire on the criminals who approached the location with 7 gun trucks and several other fighters on motorcycles.

Consequently, this encounter/ambush resulted in the annihilation of dozens of terrorists, many fled with some levels of injuries and the following equipment were captured;
a. 5 x Gun Trucks
b. 1 x Vehicule Blinde Leger (VBL)
c. Assorted quantity of ammunition
d. Unconfirmed number of motorcycles were destroyed.

The Chief of Army Staff (COAS), Lieutenant General Tukur Yusufu Buratai who has been in the Theatre of Operation for sometimes, commended the efforts and successes of the troops in recent encounters with the terrorists and charged them to sustain and upscale the tempo of the operation. He enjoined troops to be more vigilant and assured them of continuous support to ensure the looming defeat of the dying Boko Haram terrorists and the eventual destruction of fledgling Islamic State West Africa Province battling to establish dominant presence in Nigeria.

Generally, in comparable terms, the security situation within the North East zone is relatively calm and under control as troops remain committed and resolute to conducting robust multiple aggressive operations to end the insurgency.