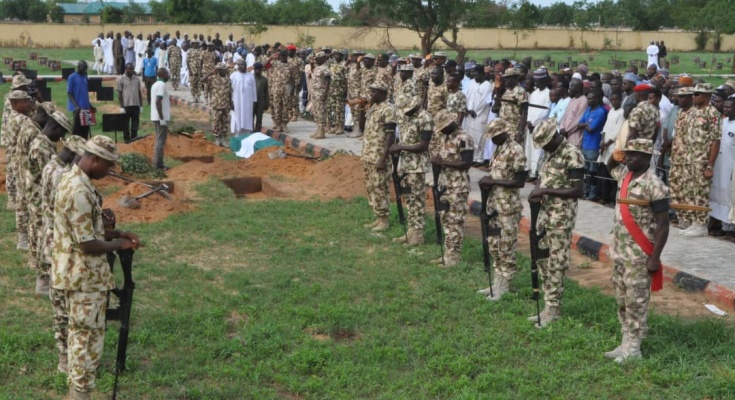 Aug 02, 2019Press ReleaseComments Off on RE: SECRET MILITARY CEMETERY CONCEALS TOLL OF ISLAMIST INSURGENCY IN NIGERIA

The attention of the Nigerian Army has been drawn to a mischievous Article titled, Secret Military Cemetery Conceals Toll of Islamist Insurgency in Nigeria, was written by Joe Parkinson and released on 31 Jul 19 in “The Wall Street Journal”. The writer alleged that the bodies of dead soldiers are covertly transported from a mortuary, delivered by truck and laid by flashlights into trenches dug by infantry or local villagers paid a few dollars by shift. It also alleged that soldiers were buried in unmarked graves at night in secret graves.

Similarly, it alleged that Nigerian Government last summer stopped reporting the deaths of soldiers in its fight against Boko Haram. Likewise, it claimed that the operational command holds the bodies of 1000 soldiers killed since the terror groups began offensive last summer. Additionally, it reported on one Mercy Tamuno, who demanded to see where her husband was buried, and she was led to a spot marked with a plastic bottle with her husbands name written on it. It further claimed that 2 soldiers from the late soldiers unit said the bottle was prepared to appease his wife. Furthermore, the writer made some derogatory comments on rotation of troops, gruesome punishments to suspected jihadists and declining morale of own troops.

Having critically studied the allegations, it was obvious that the writer’s claims were baseless and intended to smear the good image of the NA and lower the moral component of troops in the ongoing Counter Terrorism and Counter Insurgency operations. In this light, I wish to respond on behalf of the NA as follows:

Maimalari Military Cemetery is the only recognized place where burials are held in the Theatre. The stretch of land where the cemetery is located and produce beyond belongs to the NA and not taken over from any person or group of persons as claimed. This area like in other armies is secured to honour and give recognition to the sacrifices of officers and soldiers who paid the supreme price by laying down their lives for the peace, security and unity of the country. In our own case, a hall of fame was also built in the cemetery to honour the fallen heroes and act as reference point for posterity.

Burial procedure in the NA is entrenched in the NA Administrative Policies and procedures. The procedures is triggered by first notifying the higher headquarters and NOKs of the deceased personnel for coordination. It is a command responsibility and attended by officers and soldiers of the unit within the Theatre of operations. The timings for all burials in the Theatre have always been before the flags are lowered in the evening.

Maimalari cemetery is partitioned into 2 to accommodate Christians and Islam faithfuls. The graves are also partitioned, and grave pegs placed to mark each grave. Hence, the claims that soldiers were buried in unmarked graves at night in secret graves is unfounded. Suffice to state that all deceased are also honoured with the 21 gun salute in line with the ethics and traditions of the NA. As such, one wonder how the firing could be done in secret contrary to NA traditions. Certainly, commanders on their own cannot carry the corpses to the cemetery without the knowledge and support of the troops. If this is done with the awareness of the troops, certainly it would not have been a secret. Likewise, if not done with their knowledge, the commander on his own would not be able to drive the vehicle, carry the corpses, dig the graves and also bury the bodies without any support. Thus, this allegation is not only worrisome but also questionable. More especially when we have the Governor, Service Chief, Principal Staff Officers from Service Headquarters, Commanders, NOKs, families and members of the press that did attend funeral ceremonies of fallen heroes.

On the allegation that Nigerian Government last summer stopped reporting the deaths of soldiers in its fight against Boko Haram is also disturbing. Generally, events and lessons learnt from battles have shown that death in combat is inevitable. In as much as the NA tries to reduce casualties in the battle against the insurgents, it still happens as one of the hazards of war fighting. Obviously, when such occurrences happen, it is made known to higher headquarters to trigger burial procedures and processing of benefits. This is also done with the consent of the NOKs and not in the secret. Soldiers also move in pairs or in groups, as such one wonder how the corpses could be isolated without the knowledge of their colleagues, which would have dampened their morale to fight or take orders from their superiors.

The claim that the operational command holds the bodies of 1000 soldiers killed since the terror groups began offensive last summer is just unbelievable. The questions are where, when, why and for what reason would 1,000 bodies be kept in the hide without anyone seeing it or perceiving the smell. Curtaining, this allegation further buttress the fact that the writer intends to smear the good image of the NA and the Government.

The report that one Mercy Tamuno, who demanded to see where her husband was buried, and she was led to a spot marked with a plastic bottle with her husbands name written on it is again unbelievable. Interestingly, 13NA/70/9866 LCpl Adah Tamuno, whose wife; Mrs Mercy Tamuno claimed her husband was buried in the secret grave gave false report. The late gallant( soldier was serving with 119 TF Bn at Metele and died during combat. He was officially buried on 29 Nov 18 at the Maimalari Military Cemetery with proper military honour by daylight with the grave well marked, not with a plastic bottle, alongside his colleagues. Pictures of the grave are hereby attached. The last burial in the Theatre was that of Capt A Mohammed who was killed on 17 Jul 19 in an ambush alongside with Col EE Elemele and 5 others along Jakana-Benisheik MSR. The Capt was buried on 18 Jul 19 at the Maimalari Military Cemetery in accordance with Islamic rites. The burial was attended by the families of the deceased and other sympathizers.

The writer made some derogatory comments on rotation of troops, gruesome punishments to suspected jihadists and declining morale of own troops. Suffice to state that the NA has a standing policy on the rotation of troops in the Theatre. The last rotation of de-inducted troops was conducted on 28 Jul 19 and the troops are currently at the Nigerian Army School of Infantry, Jaji undergoing de-induction training. The next batch of troops to be inducted are already at the Nigeria Army Special Forces Training School at Buni Yadi for induction training, after which they would be moved to the Theatre for deployment. The pictures of the rotated troops are also available and hereby attached. In terms of the gruesome punishments to captured insurgents, one wonders why the writer decided to contradict himself in the article by reporting the immoral activities of the insurgents. The NA is a professional Army and captured insurgents are treated in line with global best practices and in accordance with International Humanitarian Laws. Above all, the morale of troops in the theatre remains high and not as reported. It is obvious that the essence of the report is to distract own troops from maintaining the tempo in the ongoing operations.

The public is hereby advised to disregard the allegations as written by Joe Parkinson and released on 31 Jul 19 in The Wall Street Journal. The NA remain resolute in its fight against the insurgents and will never be distracted by media propaganda. The threat to the national security of our beloved country require that all hands are on deck to win the war against terrorism and insurgency.

Governor, Service Chief, Principal Staff Officers from Service Headquarters, Commanders, Next of kins, families as well as members of the Press attend befitting funeral ceremonies of fallen heroes with Gun Salute as shown in the pictures below.