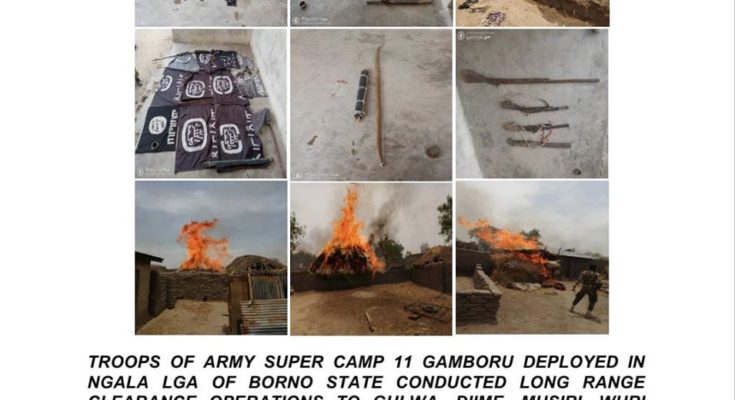 As the military inches closer and closer to the final defeat of insurgency in the NE Region, more Boko Haram/ISWAP elements are either being arrested or decimated and their equipment captured or destroyed while others continue to surrender amidst sustained artillery bombardments and offensive onslaught against their enclaves/hideouts by the gallant troops of Operation LAFIYA DOLE.

For instance, on 29 May 20, another Boko Haram/Islamic State’s West Africa Province fighter by name, Muhammadu Abubakar AKA Babagana surrendered to troops of 242 Battalion deployed at Charlie Six Check Point in Mongonu, Borno State. Preliminary interrogation revealed that the 19 year old repentant Boko Haram fighter joined the evil group about a year ago at Shaharam and participated in the attack on Tumbun Shaje. Regretting his past actions, Babagana called on his erstwhile colleagues who are currently in a state of hopelessness in the forests to surrender to the troops of the Nigerian Army before it is too late. It would be recalled that on 24 May 2020 another Boko Haram fighter Malam Adamu Yahaya AKA Saad Karami also surrendered to troops of 242 Battalion in Mongonu.

In a related development on the same day, another Boko Haram/Islamic State’s West Africa Province fighter, 35 year old Muhammadu Kabudumi AKA Amir Sabat also surrendered to the troops 242 Battalion in Monguno Borno State. Kabudumi confessed to joining the Boko Haram sect in 2015 but denied participating in any of the sects’ operations. He however revealed that he has done duties at Boko Haram criminals camps at Abadam, Malam Fatori and Duguri under the leadership of Muhammadu Lawan, a notorious Boko Haram Commander.

On 28 May 2020, troops of Army Super Camp 11 Gamboru deployed in Ngala LGA of Borno State conducted long range clearance operations to Gulwa, Diime, Musiri, Wuri Bari, Mada, Sangaya, Jarawa, Mutu, Isari and Mudu Villages of the same LGA. At Isari Village, troops uncovered a Boko Haram criminals’ hideout with well constructed battle trenches. The gallant troops stormed and searched the hideout but no contact was made as the criminals were discovered to have abandoned the hideout due to the troops’ sustained clearance operations. However, the troops recovered 2 AK 47 Rifles, 20 locally made Rifles modeled for training, 4 Dane Guns, one bow and arrow and 15 Boko Haram criminals’ flags. Additionally, troops rescued 4 elderly women from the enclave before destroying the hideout.

In another development, on 27 May 2020, troops of 17 Brigade in conjunction with elements of the Nigeria Police stormed a bandits’ hideout in Dumburun Forest and rescued 3 abducted victims. During the operation the gallant troops neutralized one bandit and recovered one FN Rifle mounted with magazine while others fled. The rescued victims have been reunited with their families. On the same day, following intense pressure mounted on bandits by the resilient troops of Operation KATSINA, some repentant bandits pleaded to surrender their weapons as well as jettison their criminal acts. Accordingly, 5 AK 47 Rifles, one Sniper Rifle, one FN Rifle, one PKT Machine Gun, one spare PKT Machine Gun barrel, one Pistol and one block engine of PKT Machine Gun were surrendered by the bandits. Other surrendered items include 5 AK 47 Rifle magazines, 2 FN Rifle magazines, 66 rounds of 7.62mm Special ammunition, 13 rounds of 7.62mm NATO belted also surrendered to troops of Operation KATSINA.

Meanwhile, the Chief of Army Staff, Lieutenant General Tukur Yusufu Buratai congratulates the gallant troops for their resilience, courage and dedication to the noble cause of defending our fatherland against the criminal elements. He further encourages them to continue to be steadfast and remain ruthless as they sustain their onslaught against the enemies of our nation.