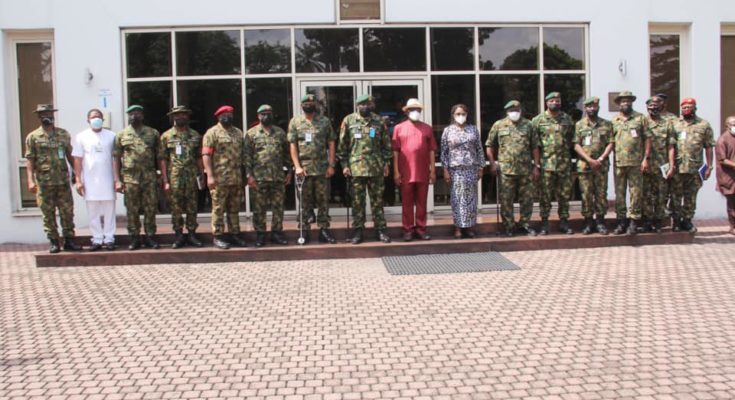 As part of his familiarization visits to units and formations in the Nigerian Army, the Chief of Army Staff, Lt Gen Ibrahim Attahiru, today, 23 March, 2021 paid his maiden Operational visit to Headquarters 6 Division Nigerian Army, Port Harcourt, where he charged the officers and soldiers to key into his vision to have “A Nigerian Army that is Repositioned to Professionally Defeat all Adversaries in a Joint Environment.”

The COAS arrived headquarters 6 Division Nigerian Army in company of the General Officer Commanding 6 Division Nigerian Army and Land Component Commander, Operation Delta Safe, Maj Gen Sanni Gambo Mohammed and inspected Quater guard Organized by personnel of the Nigerian Airforce, on ground at the Division’s Headquarters were the chief of Staff of the Div, commissioner of police ,Director state security service as well as principal staff of the Div. The chief was briefed at the Division’s Operations room, by the GOC.

The COAS while addressing officers in the Division conference hall, reiterated the key cardinals of his Command Philosophy which are Readiness, Loyalty to the Commander in Chief and to the Nation by extension, Dependable, which is to accomplish all tasks in line with the Norms and Core values of the Nigerian Army and continuous development.

The COAS stated that development especially in leadership is one which officers cannot do without as they are Commanders at various levels they find themselves. He further enjoined Commanders and subordinates not to engage in any form of illegal duties as he will not tolerate such actions.

The COAS also visited 6 Division and Land Component Soldiers of OPERATION DELTA SAFE at 29 Battalion parade ground Port Harcourt Barracks. In his address to the troops on parade, he assured them of his readiness to properly address all the challenges they are facing and further disclosed that the GOC had already briefed him on some of the challenges which he assured them would be addressed in due time.

He urged them to remain loyal and professional in the discharge of their duties and emphasized his readiness to commend outstanding soldiers, as well as punish those found wanting.

Highlights of the visit was a ground breaking ceremony for the reconstruction of 29 Battalion soldiers’ accommodation block which was razed down in an unfortunate fire incident some time ago.

The Governor in his remarks congratulated the COAS on his appointment and expressed confidence on Lt Gen Attahiru’s capability to tackle to current security situation bedeviling the nation. He added that with the COAS’ exposure and rich knowledge base, he is optimistic that things will change in the nation’s security. He further used the visit to pledge his support to 6 Division and the Nigerian Army in general.